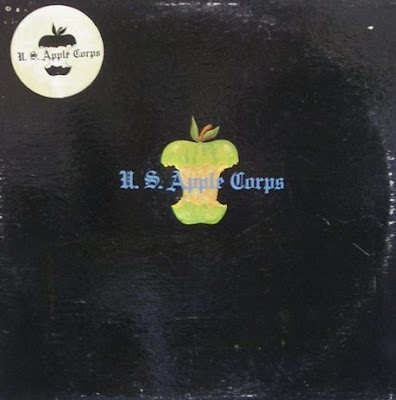 There are two non-LP singles:
- 1969's 'Prayer for Peace' b/w 'Peace-Live' (SSS International catalog number SSS-840)
- 1970's 'Elijah Stone' b/w 'Closer To the Man' (SSS International catalog number SSS-851).
There's also a single off of the sophomore set:
- 1970's 'HIgh On King Jesus' b/w 'Swing Low Sweet Chariot' (SSS International catalog number SSS-829)
----------------------------------------------------------------------------------
In the late 60's and into the 70's many rock and folk bands discovered that they loved making music, but they love Jesus even more. Artists like Norman Greenbaum, People, Brewer & Shipley, Five Man Electrical Band, The Glass Harp, Argent...and yes The U.S. Apple Corps all combined rock n' roll with Jesus Christ with mixed results...
The music presented here is solid, Christian based blues rock. It does flirt with psychedelia and even almost approaches acid rock. There is also a helping of 60's soul and gospel obviously. U.S. Apple Corps almost sound like an American version of Ten Years After, albeit more generic and Christian. The organ flourishes really help with this music, it makes it much more interesting than it should be. The guitar is decent, its pretty twangy and bluesy. The problem with this band (and almost all other Christian rock bands) is it is too damn preachy. They demand that we repent and live like Jesus would. I guess when all is said and done, this music is pretty good, but I'll take similar bands that are secular over this stuff any day.
~ by SleepObsessed (RYM).
----------------------------------------------------------------------------------
While his business dealings may have left lots to be desired (nobody ever said music was a pretty business), Shelby Singleton's an interesting guy. His musical interests were quite diverse and I'm not sure if anyone's every cataloged his eclectic musical 'catalog'. Someday I may have to do a little research into the man.
Like most Singleton projects, U.S. Apple Corps provided little in the way of performing credits, though the back cover photo showed a motley looking six piece outfit, including a black female vocalist. A couple of internet queries quickly uncovered the band was originally fronted by then 15-year old singer Bryant Sterling (aka Denis Bryant). Bryant and his band had apparently begun to attract some late-1960s interest on the club circuit, when they attracted the attention of Shelby SIngleton who then signed them to a contract with his Nashville-based SSS International label. Unimpressed with the rest of the band, prior to recording the band's debut Singleton dumped everyone but Bryant, subsequently teaming him with a group of Nashville studio musicians including drummer Jeff Pocoro, lead guitarist Tommy Shaw and bass player Jacob Stokes. As an aside, in a brief exchange of emails Bryant mentioned the female singer was recruited from a church next door to the recording studio.
Produced by Steve Singleton (whom I'm guessing was Shelby's son), 1970's "U.S. Apple Corps" offered up an interesting hybrid of Jesus rock, Southern soul and conventional rock. Recorded in three days, Bryant reportedly came up with the idea to re-record a series of classic gospel and religious tracks with contemporary rock and soul arrangements. While the idea may not have sounded all that promising, powered by Bryant's strong voice (which to my ears bore a resemblance to Spooky Tooth's Gary Wright) and some tasty fuzz lead guitar (recalling Delaney and Bonnie era Bobby Whitlock), the performances were all quite impressive. The emphasis was clearly on the music and with a couple of exceptions ('Ride On King Jesus') the material's religious quotient wasn't overwhelming. If you heard most of these tracks on the radio you'd have been hard pressed to identify them as being Christian rock. Highlights included the blazing cover of Edwin Hawkin's 'Peace In the Valley' and the hard rock remake of 'Will the Circle Be Unbroken'. The results were even more impressive when you recognized Bryant was only 15 when he recorded the LP. Like the Box Tops' Alex Chilton you had to wonder where a kid got vocal chops like that! (Promo copies were pressed on blue vinyl and apparently included a large insert.
~ by Badcatrecords.

WHAT'S WRONG WITH LIVING LIKE JESUS? LOVE YOUR NEIGHBOR AS YOURSELF....WHAT'S SO PREACHY ABOUT THAT......THIS WORLD CAN USE A LITTLE MORE LOVE............

Your story here is good and gives proper credit to the sole creator and Founding Father of CHRISTIAN ROCK - DENIS LEE BRYANT (now BRYANT STERLING), however, you list several factual and timeline errors, firstly as in the names of Bryant Sterling's (Denis Lee Bryant) band members. The studio musicians used to record the U.S. APPLE CORPS Album were seasoned cream-of-the-crop professionals taken from Memphis, Tennessee and not the band members you indicated. Tommy Shaw, Jeff Porcaro and Jacob Stokes were in a later band of (then)Denis Bryant's - The DENIS BRYANT GROUP, amongst others. This account I share is directly from BRYANT STERLING (aka Denis Bryant) himself, as I am his official Personal Internet Publicist and Websites Manager for all his music sites, pages, accounts, blogs and groups.

To read and know the exact facts, you are welcome to view Bryant's AutoBiography & Ancestry notes of his U.S. APPLE CORPS history @

Thanks for sharing and correcting your notes on the True History of The U.S. APPLE CORPS and (then) DENIS LEE BRYANT'S (now BRYANT STERLING) role as sole creator and Founding Father of the CHRISTIAN ROCK GENRE. All I state here are documented & archived facts, endorsed by Bryant Sterling himself.

Norman Greenbaum's song, "Spirit in the Sky" was not Christian music. It made fun of Christians. "Never been a sinner, I've never sinned", is not a Christian concept.