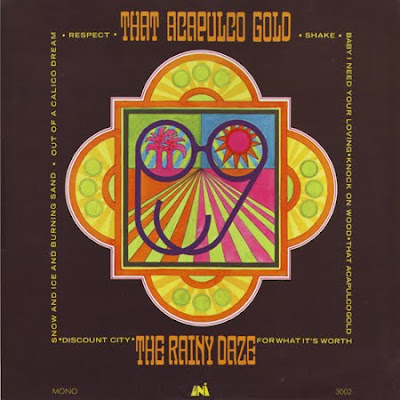 Biography:
Psychedelic pop combo the Rainy Daze formed in Denver, CO, in 1965. Comprised of singer/guitarist Tim Gilbert, his brother Kip on drums, lead guitarist Mac Ferris, bassist Sam Fuller, and keyboardist Bob Heckendorf, the group started as little more than a covers act, nevertheless parlaying a string of frat party gigs into a local television appearance that reportedly caught the attention of famed producer Phil Spector, who extended a management contract. A massive publicity campaign was in the planning stages when the spectacular failure of his magnum opus, Ike & Tina Turner's "River Deep, Mountain High," left Spector's career in shambles; the Rainy Daze were among the collateral damage, and only in 1967 did their debut single, "That Acapulco Gold" -- written by Tim Gilbert in collaboration with his college roommate John Carter -- appear on Denver producer Frank Slay's Chicory label. When the single caught fire locally the fledgling UNI label snapped up national distribution rights, but with "That Acapulco Gold" at number 70 on the Billboard charts, the bottom fell out. Once radio programmers finally intuited the song's pro-marijuana content, it was pulled from play lists coast to coast. The Rainy Daze quickly resurfaced with "Discount City," which went nowhere. The follow-up, "Fe Fi Fo," was quickly deleted and reissued under the new and improved title "Blood of Oblivion," even securing a U.K. release but still failing to crack pop radio. After an LP, That Acapulco Gold, and a Tim Gilbert solo single, "Early October," UNI dropped the group. However, by this time Gilbert and Carter were earning notice as a crack songwriting duo, and via Slay earned a crack at revamping a demo track cut by an unknown psych-pop outfit known as Thee Sixpence. Gilbert and Carter added lyrics and a new melody, titling the finished song "Incense and Peppermints." Thee Sixpence cut the new tune, renamed themselves the Strawberry Alarm Clock immediately thereafter, and in late 1967 topped the Billboard pop charts. No doubt the success of "Incense and Peppermints" contributed to splitting the Rainy Daze in early 1968, but Gilbert nevertheless signed to White Whale to record one final Daze single, "Make Me Laugh," backed by L.A. session players. He and Carter next masterminded Horses, a country-rock quintet whose eponymous 1969 LP was a victim of White Whale's pending bankruptcy. Gilbert soon after retired from music, but Carter forged on, later writing for Sammy Hagar and the Motels. He also produced two songs on Tina Turner's 1984 comeback smash Private Dancer before moving into artist management.
~ by Jason Ankeny, All Music Guide.
----------------------------------------------------------------------------------
A great pop-punk-psychedelic outfit from Denver, Colorado. Only the first 45 appears on their album which is recommended. They first formed in 1965 when they specialised in playing beat and R&B and they were a regular attraction at local frat parties. Almost unbelievably they were unearthed by Phil Spector who signed them to a management contract and a giant publicity campaign was planned but never really materialised. A year or so later That Acapulco Gold appeared on the local IP label and Frank Slay, a local producer, bought the rights and released it on his Chicory label. However, it was quickly leased to UNI and became the band's best known song making the No. 70 spot. Although they never again equalled this commercial success they continued to make some excellent 45s. One of the best, a beautifully crafted piece of pop-psych was originally released as Fe Fi Fo Fum, but was almost immediately withdrawn and reissued with a different title Blood Of Oblivion, even securing a U.K. release (Polydor 56737). Tim Gilbert, the main songwriter, also released a solo 45 Early October/If We Stick Together (UNI 55045) 1967 - folkie fare which has been compared to Tim Buckley. He would go into songwriting and his compositions (with J. Carter) would appear on Hardwater (fellow Coloradans The Astronauts in disguise), Yankee Dollar, Horses and Strawberry Alarm Clock LPs. Their album includes the first 45 and Discount City, a sorta bluesy honky tonk, which was the 'A' side of their third 45. Aside from an almost four minute medley of Shake, Knock On Wood and Respect, other notable songs include a pretty good cover of Stephen Stills' For What Its Worth, a fuzzy Taxman-like song called Weatherman and an Eastern-style slice of psychedelia, Snow And Ice And Burning Sand. However, the album's finest moment was In My Mind Lives A Forest (the flip to their first 45) - an exquisite slice of pop-psychedelia. Recommended. Compilation appearances have included: Absurd Bird on Kicks & Chicks (LP); Make Me Laugh on Of Hopes And Dreams & Tombstones (LP) and Psychedelic Unknowns, Vol. 7 (LP & CD); That Acapulco Gold on Psychedelic Visions (CD); In My Mind Lives A Forest on Psychedellc Archives, Vol. 6 and Acid and Flowers (CD); and Fe Fi Fo Fum on Highs In The Mid Sixties, Vol. 18 (LP).
~ by Vernon Joynson / Max Waller (Fuzz Acid & Flowers).

Ετικέτες R, THE, The Rainy Daze

Thanks for this....vaugely remember the single but never heard the album so thank you for sharing this....very much obliged.....cheers.