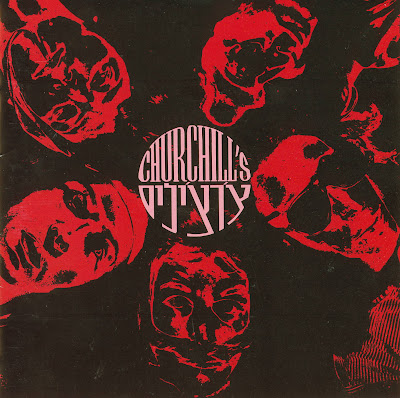 The Churchills' sole album is above average for a rare psychedelic late-'60s obscurity, and an important document as the only Israeli psychedelic record to achieve even a bit of an international cult, but not as interesting as some of the buzz generated on the collector's circuit may have you believe. Heavily influenced by both West Coast psychedelia and late-'60s British hard rock, there's often a Jack Bruce-type resonance to the vocals, and a garage-Doors vibe to the guitar-organ interplay and spacy-but-somber lyrics. Sometimes they let more of a Middle Eastern element into play, as on "Subsequent Final," a mandolin tune which sounds like a psychedelic hora dance.
One of the top 10 psych albums of all time (fact). Only released in Israel in 1968, this is an incredible psych fest with superb tripped out songs in English, amazing multi-layered, phased freaked out acid guitar solos, weird effects and exotic arabian instruments.

More Information about the group you can find here (and an interview of Miki Gavrielov).

Just discovered your blog. Much respect for all the goodness.

Thank you for all your work.
Beautiful blog!

This blog is excellent. Thanks for The Churchills- that song "Subsequent Final" is absolutely stunning. Keep up your work, you have contributed a lot here for psych fans everywhere.