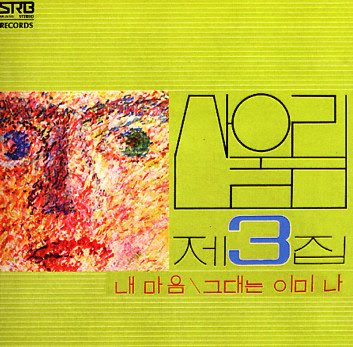 Anyway definitely their second album made 1970s rock stars in Korea. So they tried to experiment more music after success of these albums. They considered the musical originality of their 1st and 2nd albums, but were conscious of USA and UK Hard rock style at the time of the 3rd album. They wanted to make this album as Western top class Hard rock music. Firstly they didn’t use organ and used only guitars, drums and bass as a power rock trio and also made songs in a Hard rock style,( songs which were not ballad style or popular).
So their 3rd album is the most rocky album of their albums. But they failed both commercially and musically, because they did not have the ability to play the complete songs in performance.
However we had to value this as positive. They produced the best rock and now were the best rock band. The reason is that their music had creativity and rash braveness, scary frankness even though they did not have sufficient ability as musical performers they had just creativity and rash braveness. Therefore many Korean rock specialists called this album half a success or an exciting failure.

After then they made many albums and Kim Chang Wan, who was a leader of San Ul Rim, released solo albums and Children’s songs collections. But their creativity was dried up and the music became more popular, so they focused on commerciality.

Description Dusty Groove of San Ul Lim - My Heart Vol. 3: Super fuzzed out, trippy 70s psych rock from Korea's San Ul Lim -- an album recorded by the Seoul rockers in the power trio format of guitar, bass and drums -- but with such a fuzzy, dense tone that it's hard to fathom how on Earth they got the sound! The opening track starts in wonderfully eye-opening fashion with the buzzing guitar sound and raspy vocals -- but the follow up tracks have a softer vocal tone and more of a spacey effect -- kind of evocative of "Sister Ray" in the relentless buzz sounds, but with a more lilting overall vibe! Includes notes in English, but the titles are Korean -- 5 tracks in all, including a mammoth 18 minute closer! (Apologies for the lack of track titles -- the booklet includes an English language essay, but not a translation for the song titles!)

Hi, do you have this korean lp: