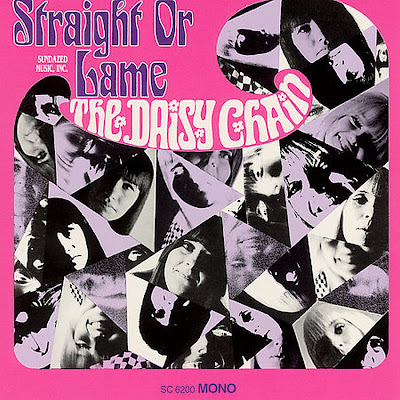 Extremely rare Southern California 1967 privately pressed psych / pop girlgroup album, that is highly sought after.The original L.P. was limited to only 500 copies. This album includes 12 tracks and the girls play all their own instruments, guitars, bass, drums, organ, the occassional fuzztone and sometimes horns and flute. Two of the members, Rosemary (as Rosemary Butler) and Shel Le (as Shele Pinizzotto) later went into the all female hard rock trio "Birtha" who released two albums in 1972 and '73.

----------------------------------------------------------------------------------
Female rock bands were not unheard of in the '60s, but they were rare. The Daisy Chain were one of the few. Hailing from southern California, the quartet cut an album of mostly original material in the summer of 1967 -- aka the Summer of Love, of course -- which was released later that year by United International. It made almost no impact but became something of a collector's item (as most little-heard psychedelic pop records do), eventually seeing a CD reissue in 2005 by obscuro rock specialists Sundazed. This straight-up reissue -- no bonus tracks, just typically good sound and liner notes from the label -- proves that the Daisy Chain are primarily interesting because of the novelty of a girl group recording a set of vaguely trippy, mildly swinging psych pop in 1967, not because the music is any great shakes. As brightly colored and fluid as a kaleidoscope, built on a swirling organ and trebly guitar, peppered with flute and brass, swinging between soulful stompers and dreamy pop tunes, and recorded in an appealingly thin mono that preserves the music's colors while muting them, Straight or Lame is quintessentially of its time, sounding as if it were the template for the Karry Nation in Beyond the Valley of the Dolls. Only it's not quite as interesting as that, since the Daisy Chain weren't a particularly good band. The sounds are here, but the songs simply aren't: there are hooks, but the songs never gel, so Straight or Lame becomes interesting for the sound of the record itself, but even that is hampered because the group members aren't good singers, partial to histrionic oversinging and all possessing a tendency to drift out of tune, whether they're singing harmony or lead. All this enhances Straight or Lame's standing as a '60s psych artifact, and for all of its faults, it surely does evoke the era, which will surely be enough for most collectors of rare '60s rock, but anybody expecting a lost masterpiece will find this quite a letdown.
~ [Allmusic.com]

Ετικέτες D, THE, The Daisy Chain