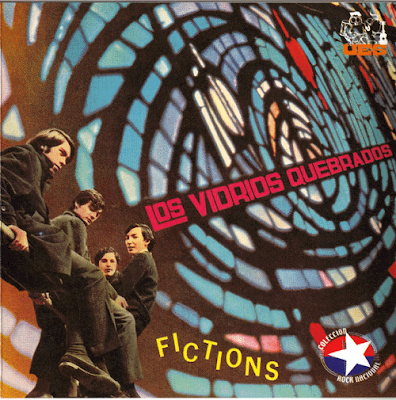 A highly-rated beat / R'n'B / folk-rock outfit from Chile. Originally known as Los Cuervos (The Crows), three quarters of the band met whilst studying law at the Catholic University in Santiago and discovered a common love of bands such as The Beatles, Kinks, Yardbirds and The Byrds. At their first gig as Los Vidrios Quebrados in 1965, at the University, they played just three songs, but these were sufficient to win them a record contract with Emilio Rojas' Odeon label. After the Friend and She'll Never Know I'm Blue single, in 1966, they recorded their sole album Fictions in 1967. This was recorded in two nights on only three channels and spans Byrds'-influenced chiming folk-rock, to Yardbirds-influenced R'n'B material. The original release came with a four-page lyric booklet which is now hard to find. All twelve tracks were originals and overall a very consistent standard was achieved - with the catchy title track the pick of the bunch. All their recordings were made with mostly home-made instruments and/or amplifiers, creating everything from scratch using furniture, record player cartridges for pick-ups, bottle-caps for tambourine parts and loud speakers - the only "bought" item being a Gretsch pick-up! Although the band never recorded any cover versions, they considered that rock 'n' roll could only be sung in English and refused to sing in their native language, arguing that a cueca (the Chilean national dance) could not be sung in English. Their baroque approach also helped introduce them to a wider audience, including classical radio, whilst at T.V. appearances, where they were required to lip-sync, Juan Enrique would on occassion play the drums with flowers whilst the band would sing phrases not in the audio mix. Locally, they were so successful that, in 1967, they went to Europe to attempt to make it big. However, they soon went their separate ways.(taken from "Dreams, Fantasies & Nightmares")

THANK YOU ALL...
...BUT I HAVE TO DELETE THE DOWNLOAD LINKS!
DUE TO COMPLAINTS TO THE BLOGGER "BY INDIVIDUAL USERS OR SMALLER AGENCIES"
SORRY...

Without any doubt the best album from Chile in the 60s.
if you like it and you want to hear more from them, like their FAB debut single and lots more from other Chilean bands visit
http://diveintoyesterday.blogspot.com
I re-posted a homemade comp on August 2008, check it out!