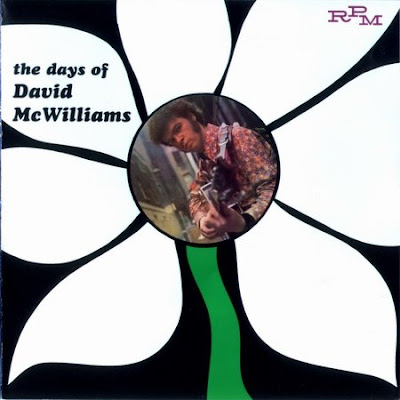 An Irish folk rock artist who in 1967 released three albums of his own material on the Major Minor label. An amazing period of productivity matched by the amazing consistency of quality throughout all the material he wrote and recorded. Musically he backed himself on 6 and 12 string guitar with further arrangements and orchestration provided by the then wunderkind producer Mike Leander. The combination of McWilliams heartfelt lyrics and songstyle with Leanders evocative arrangements of the simple melodies still sound bewitching today.
----------------------------------------------------------------------------------
Biography:David McWilliams was a Belfast born singer-songwriter who gained some acclaim in the late 60s for his hit "The Days Of Pearly Spencer", which was memorable for its distinctive use of distorted vocals in the chorus. Much to McWilliams' frustration the song, which had been getting airplay on the pirate radio stations in the UK, was not playlisted by the BBC, possibly due to the fact that his manager was also a director of pirate station Radio Caroline. As a consequence the song was a huge hit in most of mainland Europe but not in the UK. Not until a faithful cover version by Marc Almond in the early 90s would it finally enter the UK charts.
McWilliams went on to release numerous albums throughout the 70s and 80s and though he enjoyed a sizeable live following throughout Europe, major mainstream success eluded him. In the 1980s he settled in the coastal town of Ballycastle in Northern Ireland, occasionally playing local festivals until his death in 2002.
~ RYM

thank you so much

thank you so much