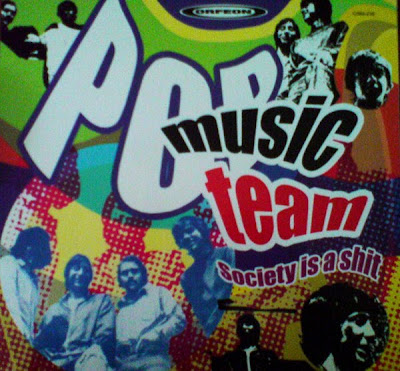 Unreleased killer psychedelic rock from 1969 in Mexico! What a sound these guys had! All original tracks with killer fuzz guitar and organ, mostly sung in English.

you might find a cd copy for almost 200$. This one is pretty rare & highly recommended for all those who are always looking for psychedelic obscure`n`rare (as hell!) stuff.Dig fuzzzzz like I do right? Well this is for you..., soft listeners, be careful. Yijaaa.
~ by: musica acida. 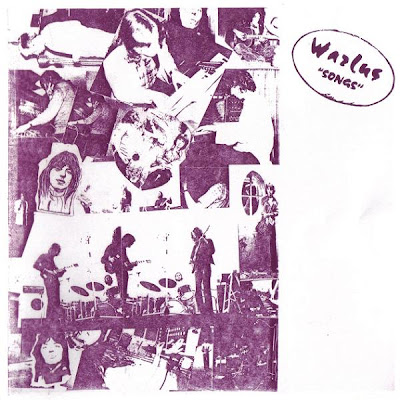 Recording sessions took place in 1975 at an old Theatre named Val de Gally where they set the recording equipment and two Revox machines. In 1976, new home recordings done at a Paris flat were added to the final mix.
Released as a private edition of only 200 copies in 1977 on the private Joint label (but recorded two years earlier, in 1975), Warlus Songs could be regarded as the king of all French 70s obscure private pressings.Warlus was the brainchild of young musician Richard Maubert, who created a mini- masterpiece of twisted, melancholic fuzzed-out psychedelic pop, with a charming homemade sound/production and druggy atmosphere. Sung in English, it also brings to mind some obscure USA private pressings like Kath. This is a very special record that will appeal to both psych aficionados and fans of 70s DIY weirdness.If you like other French private pressings like Dandelion and Les Temps Heureux, you’ll be amazed when you hear Warlus.
~ by: http://www.anthologyrecordings.com/
---------------------------------------------------------------------
"There exist a few French rarities issued during the seventies that had both '60s Anglo-Saxon references (implying English only lyrics), acoustic guitars, a distinguished underground flavour (implying a skinny production), psychedelic background... and no recognition at all.Warlus is one of them.Distant (drums and electric guitar parts are rather far-out), slightly echoed "ballroom" sound, acoustic guitar all along : the sixties are not very far away here.Looping ballads, soft -male only- acid folk voice, very nicely used sound effects, musically a little "light" by parts (deserved a producer).Compositions are slow but good (deserved a little more rock), a little too slow for sure at today's scale (no groove, sorry), but this is the very charm of this album."
~ by: Discogs. 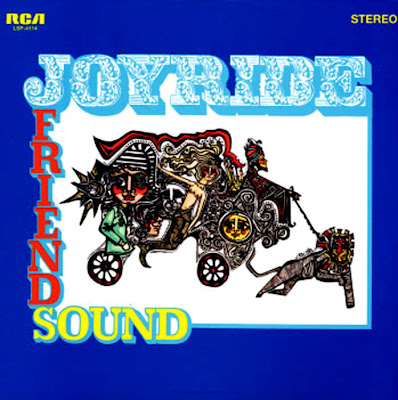 Related Artists:
The Beat of the Earth, Brotherhood, Cosmic Travelers, Paul Revere and the Raiders

Self-produced, 1969's "Friendsound" makes absolutely no attempt to go down the commercial road and to ours ears may deserve to be noted as one of the first real "jam" albums. It's also one of those rare instances where the liner notes are dead-on ... "A musical free-for-all ... The idea for Friendsound came to us when we were in the early stages of creating our first album. We rounded up all out musician friends in the area and headed for a recording studio to have a musical free-for-all." That pretty much says it all. Exemplified by material such as the title track and "Childhood's End", the six extended numbers were largely instrumental in nature. Credited as group compositions, songs such as "CHildsong" and "Empire of Light" are full of studio experimentation, including backward tapes, sound effects and acid-influenced ramblings. Raiders members Levin, Smith and Volk were too grounded in top-40 pop to totally abandon such concepts as rhythm and melody, but it's pretty clear late night parting imbued them with a lot more freedom and creative latitude than your typical Paul Revere and the Raiders session. Not for the faint of heart, or top-40 junkies, but worth checking out for the more adventuresome of you out there ...
----------------------------------------------------------------------------------
Upon leaving Paul Revere & The Raiders, Drake Levin, Phil Volk & Michael Smith formed Brotherhood who released two albums for RCA. In between those two releases, the trio teamed up with a few session musicians as Friend Sound, releasing "Joyride" A wild batch of instrumental psychedelia -- with plenty of avant garde touches thrown in! This is the sort of record that always restores our faith in major labels -- and it makes us realize that no matter how many Elvis Presley albums RCA was selling in the 60s, there was also room to put out odd little record like this one. The enigmatic Joyride are kind of a loose collective of hippie jazz musicians -- playing flute, organ, guitars, percussion, piano, recorder, shovel (shovel?), finger cymbals, and just about anything else that seemed to be handy -- and they had a style that was kind of like free-jamming jam band stuff, but with out the skill of most jam bands. Ok, it sounds like we're talking ourselves into a corner -- but the record's pretty darn compelling. It's kind of like the band and the engineers took a bucketful of drugs -- so many that they got really mellow and dark -- then went into the studio to cut a tripped-out album of instrumentals. The whole thing comes across with the same "anything goes" spirit of the NY 60s underground film scene -- but with none of the silliness of bands like The Fugs -- and it's that kind of energy that makes us love this one, and be proud that we're just giving it a space to exist. Titles include "Childhood's End", "Lost Angel Proper St", and "The Empire Of Light". 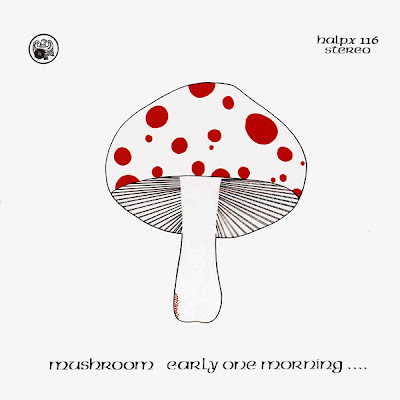 Formed in Dublin in the early 70’s, MUSHROOM* were one of Ireland's leading pop bands from ‘70 to ‘74. In fact, they had a huge hit with their first single "Devil Among the Tailors" from their LP "Early one morning" which reached no. 2 in the Irish top 20 charts in 1973, selling over a 100,000 LP’s and singles; another song, “Kings and Queens”, reached number 13 the following year. They band comprised five musicians among whom were violinist Pat Collins and guitarist Aengus McNally, son of actor Ray McNally; the other three contributed to the band’s acid folk sound with organ, moog, harpsichord, bass, drums, tin whistles, chimes, bodhran and vocals. As far as comparisons go, HORSLIPS comes immediately to mind.
Their album features traditional Celtic folk-flavoured melodies that are given both a delicate and hard-rocking treatment: delicate in the form of melodic, mellow ballads, and hard rocking when Collins’s fiddles battle it out with McNally’s fuzzy, blazing guitar, particularly on traditional instrumental jigs. Although not as sophisticated and instrumentally accomplished asa FAIRPORT CONVENTION or a STEELEYE SPAN, for example, MUSHROOM’s release is still worth a spindespite the average sound quality, if only for the pleasure of hearing some vintage psychedeliagiven a nifty Celtic folk treatment.

* Note: the CD version includes the band’s famous mid-70’s singles in the form of 3 bonus tracks.
* Not essential but could be of interest to fans of HORSLIPS, MELLOW CANDLE and JIMI SLEVIN.
* Not to be confused with a contemporary American space-rock band of the same name.
~ by: http://www.progarchives.com/. 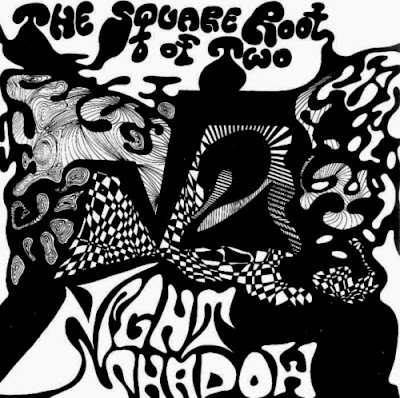 Reviews:
And here's another longtime legend, reissued as early as 1979.
The band was usually known as Little Phil & the Nightshadows and had roots in the pre-Beatles era, but changed their name due to legal complications at the time. Unlike the Litter LPs I think this really is as great as people would have you believe, particularly side 1 which is like listeningto a comp of killer fuzz acid punk 45s. Beyond Phil's showmanship and the blatantly druggy lyrics and sound fx the fact remains that the superb songwriting puts most "Nuggets" classics to shame, and the band is completely at home in a sound that was unusual for the deep South. Some silly songs close the LP but all over this must rank among the top early garage psych LPs. Apart from the LP they had some killer 45s in 1966-1967.
~ [PL]
----------------------------------------------------------------------------------
The Nightshadows discography is very complex and includes multiple versions and remixes of the same recordings, as well as 45s released under aliases, withdrawn records, and more. Here's an attempt to sort "Square Root" out:
1) The 1968 original came with a bonus 45 that contained the band's risque songs 'Hot Dog Man' and 'Hot Rod Song' on Banned records (both also on the LP); this with 900 copies of the LP. The poster was supposedly included with the remaining 100 copies that did not include the 45, although some subsequent finds of sealed copies have included both the 45 AND the poster.
2) The 1979 Hottrax release is a unique remix with "So Much" having an extra guitar lead, while "60 Second Swinger" has a loud fuzz riff added throughout. "Anything But Lies" has been shortened by 1 minute. Both front and back cover have been altered, as well as the running order.
3) Both the European 1990s bootlegs are sourced from the 1979 remix rather than a 1968 original.
4) The recent CD series is the easiest way to get a complete picture of the Nightshadows. Vol 3 has all tracks from the LP except "Hot Rod Song", which can be found on vol 2. "So Much" is the 1979 remix version, while "60 Second Swinger" and "Anything But Lies" are the 1968 LP versions. The running order from the LP has been completely broken up. Some of the unreleased bonus material is very good.
~ (Internet Source).
----------------------------------------------------------------------------------
The Night Shadows were one of the first and longest lived garage bands. They started out in the 50’s hailing from Georgia and first received notoriety when releasing the dirty, perverted garage rock single Garbage Man. The early 60’s were not kind to the Night Shadows as they went through various lineup changes. Other singles followed though, influenced by the British Invasion, utilizing feedback and other current recording techniques. In 1966 a new revived Night Shadows (including Little Phil) released the excellent 60 Second Swinger. It’s similar to the Seed’s efforts from around the same time but the Night Shadow’s cleary had more instrumental prowess and experience behind them.
In 1968 they released their psychedelic masterpiece, Square Root of Two. Square Root of Two has some rerecorded psychedelic interpretations of earlier singles along with then current compositions.
Of the 11 songs there are a few throw away tracks such as the Prologue, Hot Dog Man and Turned On.
These songs are a little too self indulgent with sped up vocals, lengthy commentary, backward tapes, phased guitars and just plain stupidness. The rest of the lot fairs much better though and even with the above mistakes this album still rates as a prime slice of acid punk.
I Can’t Believe follows the silly intro on side one and is nine and a half minutes of fuzz guitar soloing and howling courtesy of Little Phil. Somehow it all works and the psychedelic versions of Plenty of Trouble, 60 Second Swinger and So Much work well too. Plenty of Trouble sounds like a devil chant with shakers and wicked vocals from Phil. The classic 60 Second Swinger is transformed into a hard, bluesy garage shuffle with some Itchycoo Park-like organ and a fake live intro. Most essential though are Anything But Lies and So Much. Anything But Lies is characterized by distorted, angry vocals and jackhammer riffs while So Much has great stinging acid guitar and is psych punk perfection.
The Square Root of Two is a good, forgotten album that should not be missed by garage psych fans.
~ (Internet Source).
Enjoy !!!