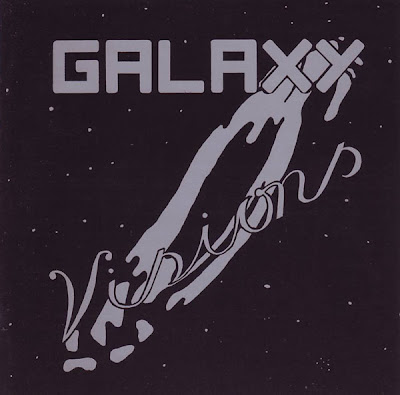 Notes:
Recorded at "Galaxy Studios" between July and September 1978. Originally released as a private pressing (SST/PR 020978) of 500 copies.

Not too be confused with another, more renowned, German group of the same name, which in the same year released the album Nature’s Clear Well, the Bremen-based Galaxy are yet another in a series of mega-obscure bands uncovered by Germany’s Garden of Delights label. Unfortunately, this is one item that probably deserves its underground status. Originally released in a small, 500 copy pressing, which was essentially sold to friends of the band, this album sort of has “garage band” written all over it. The most obvious comparison would be to early Eloy, but with perhaps even more of a hard rock vibe. To be fair, the band has some good ideas, as the songwriting displays a knack for catchy hooks. Unfortunately the album is rather bogged down by the unimaginative, lead-footed drumming, which lends an air of amateurishness to the entire affair. Indeed, the band does not sound particularly tight here, despite the fact that they had apparently been together for almost three years prior to the recording of the album. Having been recorded in the band’s home studio, the production also leaves something to be desired, as the trebly bass and the loud, consistently behind the beat, hi-hat have a tendency to grate on the nerves. Vocals are delivered in English, by way of a German-accented caterwaul. At times, they can actually be appealing, but unsurprisingly tend to wear thin due to overuse.

Songs like the melodically varied “Warrior of the Endless Time,” the mellow, symphonically inclined “Morning of the Magicians: Part One,” and, in particular, the dynamic title track, all contain a wealth of nice ideas, particularly by way of the guitar and keyboard playing. Many of the pieces begin with tasteful acoustic guitar, before moving into more anthemic, keyboard led portions, or into heavy electric guitar passages. Opener “Ladies in the Wind” is an aggressive rocker, and has what could have potentially been a great hook, but one which is unfortunately driven into the ground over its six plus minutes. To be sure, there is probably enough here to appeal to the hardcore German rock aficionado, those who would probably forgive the decidedly unpolished, unprofessional feel of the album in any case. However, with that said, casual fans will probably want to pass on this one.
~ (Greg Northrup, http://www.progweed.net/)
Download links:
Galaxy__Visions__Ger_1978_progressive_rock__krautrock_.rar 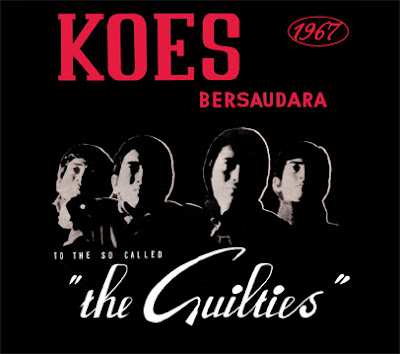 Sinopse:
This CD features the first ever reissue of Koes Bersaudara’s two extremely rare and almost impossible to find albums from 1967 – To the so-called “The Guilties” (12 song full-length LP)
and Djadikan Aku Domba Mu (8 song 10-inch LP). Guilties has long been considered by Indonesian music historians as their nation’s legendary garage rock masterpiece as well as the first record to directly challenge or speak out against the Indonesian government.

This CD features the first ever reissue of Koes Bersaudara’s two extremely rare and almost
impossible to find albums from 1967 – To the so-called “The Guilties” (12 song full-length LP) and Djadikan Aku Domba Mu (8 song 10-inch LP). Guilties has long been considered by Indonesian music historians as their nation’s legendary garage rock masterpiece as well as the first record to directly challenge or speak out against the Indonesian government. Recorded live in the studio in a few hours, the album is laced with a raw, guitar-driven sound that forays into
previously unexplored realms of the mid-sixties beat generation. Though Guilties is obviously
inspired by Western bands of the period, the record possesses a unique feel throughout and will
challenge you to find obvious derivative Western sources (with the exception of the Byrds guitar
style on Apa Sadja). Djadikan Aku Domba Mu was actually recorded a few months before the Guilties album and has a much dreamier feel overall. Some of the tracks are more psychedelic and reminiscent of the ballads the Koeswoyo brothers would create at the end of the 1960s.
Also included in this set is the extremely rare studio outtake Land of Evergreen, the only cut
in this collection that was recorded in stereo. One of 4 tracks on this CD sung in English, Land
of Evergreen features an absolutely stunning guitar intro and is one of the best songs Koes
Bersaudara ever created. Koes Bersaudara (Koes Brothers) formed in Jakarta in 1960. At the beginning, the group consisted of 5 Koeswoyo brothers – Jon, Tonny, Nomo, Yon and Yok. After their first album was released in 1964, older brother Jon quit reducing the group to a four-piece.
Tonny (lead guitarist and songwriter) was the leader of the group with Yon (rhythm guitar) and
Yok (bass) handling the vocals along with Nomo on drums. By 1965, the group started to grow
their hair longer, wore high-heeled leather boots, and added Beatles’ songs to their stage show.
President Sukarno began waging war against the influence of Beatlemania which had taken hold of the Indonesian popular music scene. Koes Bersaudara was arrested and spent 3 months in prison for performing a Beatles song at a private house party. They were released from jail at the same time General Suhuarto launched his military coup and former restrictions on Western pop music began to be lifted. By 1967 Koes Bersaudara was back in the studio recording what would become their most challenging music on Dick Tamimi’s Mesra Record label. Nomo left the group in 1968 and after Tonny, Yon and Yok found their new drummer Kasmuri (Murry), Koes Plus was born in 1969 and became the most popular Indonesian band of the 1970s. These reissued tracks have been coveted by serious “in the know” collectors worldwide for decades and will surely appeal to all fans of the pop and rock era of the mid-late 1960s as a significant missing piece of the global pop music history puzzle.
~ musicasdosanos60.com.
Download links:

I' M LEAVING FOR VACATION... 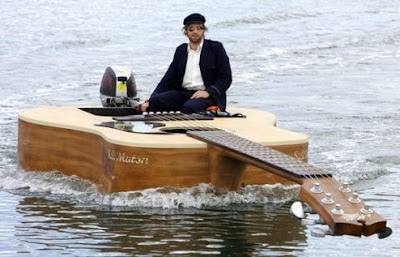 HAPPY SUMMER TO EVERYBODY... 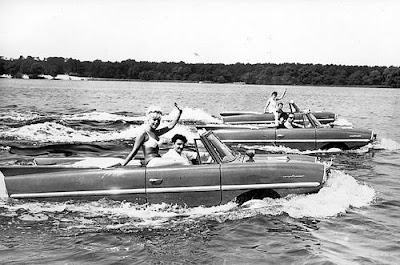 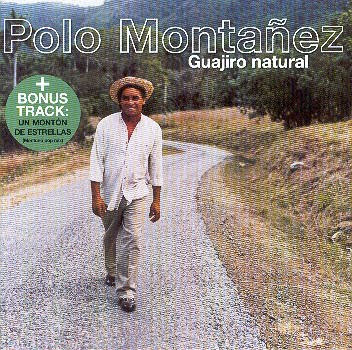 Polo Montañez (June 5, 1955 - November 26, 2002) was a Cuban singer and songwriter.
Montañez was born Fernando Borrego Linares in Sierra del Rosario, Pinar del Río, in a farm known as El Brujito. At an early age he worked various jobs including driving a tractor, milking cows, making coal, assisting on the family farm, and as a lumberjack. In his spare time, Montañez would go from house to house singing and later began to sing in local parties and family gatherings.
In 1994, Montañez formed his own ensemble of family and friends. He quickly became the house act at a resort in the nearby touristic community of Las Terrazas, and in 1999, Montañez signed with European record label Lusafrica after being discovered by one of their directors that was staying at the resort.
Montañez had his biggest success in March 2000 with his first CD "Guajiro Natural" and the song "Un montón de Estrellas". He became known as the Guajiro Natural (Natural Countryman) because of his humble personality and songs about the peasant life in Cuba.
Polo Montañez died on November 26, 2002, six days after being hospitalized in the Carlos J. Finlay Military Hospital, as a result of a tragic car accident in the Coronela zone near San Cristóbal, Pinar del Río. The Centro Cultural (Cultural Centre) on the main square in Viñales, Pinar del Rio, is named in his memory.
~ From Wikipedia.
----------------------------------------------------------------------------------
Polo Montañez has left us
The charismatic singer dies as a result of a traffic accident on Wednesday, November 20
See also: Interview: "I Always Go Back Home" (Granma International, 02 Nov. 2002)
DESPITE the tremendous efforts by doctors to save him, 47-year-old Fernando Borrego (Polo Montañez), one of Cuban music's most charismatic artists of recent years, died at 11:20 p.m. on November 26 at the Carlos J. Finlay Military Hospital. His death was the result of a lamentable traffic accident that occurred on Wednesday, November 29 when he was returning by car from the capital to his home in San Cristóbal, Pinar del Río province.
It was an agonizing week in which people followed news on his grave condition by the minute. Day and night, from one end of the island to the other, Cubans demonstrated their solidarity and expressed their most fervent hopes for the artist's recovery. But he was unable to survive the serious brain trauma and the ensuing complications of such a precarious condition.
Granma daily has received many tributes to Polo's brief but meteoric musical career from both home and abroad. Shortly before his death, a letter from Italy described affirmed: "A man like him - of the people, modest and ordinary - knows how to win everybody's affection. He's in all our hearts and we are proud of him."
Polo Montañez burst upon the island's musical scene like a bolt of lightning. In under a year - in the second half of 2001 - he rose to the top of Cuban radio stations' hit lists with "Un montón de estrellas" (A Mountain of Stars). With this and other songs from his first CD Guajiro natural (Natural Countryman) he won over the Colombian public and made inroads into other Latin American countries and Western Europe.
His surprising and, at the same time, powerful ride on the crest of the Cuban musical wave and his incessant international success was accompanied by a type of legendary mystique fueling the tale of a guajiro who charmed the world with his simple, moving music.
And his patriotic feelings led him to set to music the poems of Antonio Guerrero, one of the five Cubans imprisoned in the United States.
Polo Montañez' second CD on the Lusáfrica label was released in May; Guitarra mía (My Guitar) established him among us, building upon his achievements during the last two months of spring when he filled stadiums and plazas the length and breadth of the country.
Of late, the singer had enjoyed Puerto Rican Gilberto Santarrosa's splendid version of "Un montón de estrellas". And he was preparing to continue touring abroad to promote his second disc.
~ By PEDRO DE LA HOZ -Granma daily staff writer-