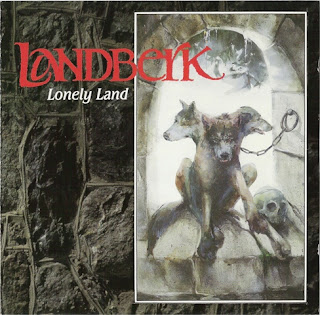 Unlike previous efforts to 'do an English version' (PFM, Kraftwerk), Lonely Land works very well indeed, with Dimle and Nordberg's lyrics translating well, assuming they are straight translations; some of the titles certainly are. Aside from the slightly brighter sound, the album is very similar to Riktigt Äkta, to be honest, although the English lyrics put a different slant on the material for the English-speaker. The other chief difference between the two versions is the excellent cover of T2's No More White Horses, complete with the Mellotron missing from the original. The bonus track on the Riktigt Äkta CD, Tillbaka (a cover, apparently, though I don't know of whom), hasn't been re-recorded, so you really need both of these.
~ internet source.
----------------------------------------------------------------------------------
The first Landberk album for me has great significance for a 'cover song'. Track 5 "No More White Horses" is a cover of Peter Dunton's song which was recorded by T2 in 1970 (Original (Short) version by Please in 1968). Not that this is the only song of note on this album.
On the debut album "Lonely Land" these guys almost openly recreate the sound of the '70s, actively and effectively using such famous (and popular) keyboard instrument as Mellotron (The Keeper of the string samples). A lot of acoustic piano, and some songs feature even accordion.
Cold, Northern music with slow dramatic themes and quite complex arrangements slightly influenced by such bands as Van Der Graaf and PFM. Keyboards play a prominent role here, though often you can hear excellent sad guitar solos.
If you haven't heard the T2 "It'll All Work Out In Boomland" version and want to - Check out the post on this blog (if the link is down I will post it again for you) it has blistering Guitar work from the (then 17 year old) Keith Cross.
Please note this is the English version of "Riktigt Akta" which is their Swedish first album in 1992.
The music here is pretty simple (especially harmonically speaking), it creates a nice, melancholy mood using mellotron, flute, and guitar to good effect. Vocals for the most part are quite laid-back, fitting the slow, plodding mood of the disc. Guitar solos form the only real breaks from the broodingness of the music, and even those are somewhat cold: either chilly acoustic work (a la Robert Fripp's acoustic runs in "Cirkus" from Lizard) or a dirty, tortured tone from the electric guitar. Few specific influences come to mind, though there are definite similarities to early King Crimson, certain Anglagard passages (it's worth noting, though, that Riktigt Akta was released before any Anglagard albums), quieter Anekdoten pieces, and perhaps the more mellow compositions out of 1970s Italy. While I am told that later albums by this band begin to steer closer to pop-prog territory, this is a worthy release for fans of Scandinavian prog that don't mind a lack of harmonic activity.
~ by ZaXXoN. 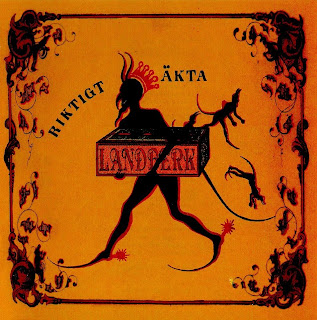 Their first album was originally released in its Swedish-language version, Riktigt Äkta, which they re-recorded in English as Lonely Land. These appear to be two entirely different recordings; the Swedish version plays flatter and has a rawer sound than the English, and both albums have different bonus tracks, making them both essential for the aficionado. I Nattens Timma/Waltz Of The Dark Riddle is something of a 'Tron classic; Mellotron flute (underpinned with cello) and vocal, with the 'Tron (played by Simon Nordberg, incidentally) switching to strings halfway through each verse, coupled with a haunting melody that could only be Scandinavian. The rest of the album carries on in a similar vein, although there are a couple of slightly more upbeat numbers; Landberk were nothing if not melancholy, to the point where they made their aforementioned contemporaries sound like quintessential party bands. Well, nearly. There are too many highlights to name, but the 'Tron strings on Undrar Om Ni Ser
(redolent of Crimso's Epitaph) are really quite superb. One of the band's strengths was not overusing the 'Tron, although it would've been far too easy to have smothered the whole thing in it. Admirable restraint, and a great album.
~ internet source.
----------------------------------------------------------------------------------
My first impression of this Swedish band's debut album was: boring as hell. After quite a bit of repeated listening, though, I've come to a different conclusion. While the music here is pretty simple (especially harmonically speaking), it creates a nice, melancholy mood using mellotron, flute, and guitar to good effect. Vocals are in Swedish (there is an English version on Laser's Edge entitled Lonely Land) and are pretty well-done: for the most part quite laid-back, fitting the slow, plodding mood of the disc. Guitar solos form the only real breaks from the broodingness of the music, and even those are somewhat cold: either chilly acoustic work (a la Robert Fripp's acoustic runs in "Cirkus" from Lizard) or a dirty, tortured tone from the electric guitar. Few specific influences come to mind, though there are definite similarities to early King Crimson, certain Änglagård passages (it's worth noting, though, that Riktigt Äkta was released before any Änglagård albums), quieter Anekdoten pieces, and perhaps the more mellow compositions out of 1970s Italy. While I am told that later albums by this band begin to steer closer to pop-prog territory, this is a worthy release for fans of Scandinavian prog that don't mind a lack of harmonic activity.
~ Review by Brandon Wu.
----------------------------------------------------------------------------------
Nowadays, the Scandinavian scene sets the patterns between melancholy and tragedy within the realms of progressive rock. "Riktigt Äkta" is a rare composition, so human, so dark that evokes the deepest feelings you've been holding inside and will take you to the point where you can be exposed to the real essence of this symphonic masterpiece. Many Swedish bands are out there on the spotlight standing still to the inclemency of top prog bands, but its projection is greater than its anonymity. That'd be the particular case of ANEKDOTEN, which combined its talent with some of the skillful musicians of LANDBERK to produce in 1998 the ultimate instrumental progressive piece, "Symphonic Holocaust". The band commanded by Patrik HELJE on vocals, reached vertiginously its peak with debut album "Riktigt Äkta", making the rest of the LANDBERK experience worthwhile. Disbanded in 1996 right after "Indian Summer", the formula reinvented by the Swedish band will remain still no matter what musical changes or progressive tendencies.
Definitely, one of the best albums released in the early nineties. Get to know this proposing and enigmatic band, you'll be enchanted. No more to say.
~ Review by Cloud Zero. 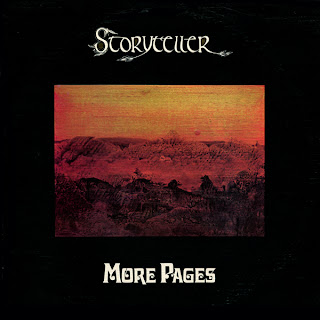 Comments:
Around 1969, Caroline Attard moved to a new band that was being formed, Storyteller:
Their first album, Storyteller was produced by Andy Bown and Peter Frampton.
After the 1st album, Rod Clark leaves Storyteller, being substituted by Chris Belshaw:
Their 2nd album, More pages, was produced by Andy Bown alone. It contains the contribution of Henry Spinetti on drums who was to join the band, and Harold Beckett on trumpet and flugelhorn.
Now with Henry Spinetti, this is the new lineup in 1971:
But the band finally parted ways in that same year 1971.
Around that time, Caroline married to Andy Bown, and she became Carolyn Bown.
~ by musiciansolympus.blogspot.com.

Special thanks to my RYM friend, ZenBa! 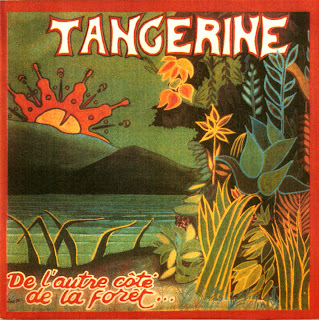 Tangerine were a simple folk quartet based out of France, distinguished by the luminous lead presence of Valery Btesh and the ornate flute work of Marc Donahue. With the potential of four, count 'em four acoustic guitars at work and equally layered vocal harmonies, you know what you can expect, and this is where the band's undoubtedly excelled. Discounting a few instrumentals, half of the songs are sung in their native tongue, and the other half in English, with uncommonly minimal intrusion from accents.
De L'Autre Cote de la Foret is another of the great unsungs. Though the album gets off to a decent if unremarkable start, we soon hit Btesh's "Meditations," which I'll go on record saying is one of the most beautiful songs I've yet come across in my explorations over the years under the broad prog umbrella, and that's simply not an overstatement. Picture Genesis circa Trespass transplanted to the rural countryside with a French Sandy Denny singing a melody that hypnotizes all in its path. If I need to say more, then as was once said elsewhere, "you'll never know."
Though obviously less ambitious, "Direction Sud" is another tune from this band that has stuck with me through the years, an acoustic pop tune with stalwart harmonies and a beguiling chorus. Past these, there are additional songs ("Liberte," "It's Ending," "Listen") with other delicious melodies that solidify this album as a must-track-down for the latent or not-so-latent folkies of the prog community.
Granted, as can be discerned from the songs in English and the general style of the band, Tangerine drew at least some influence from the West Coast psych-folk scene that permeated the late 60s. In fact, this often seems more like an album that would have been made in 1968-69, rather than 1975. Even so, this album is a far cry from the posturing, make-love-for-Jerry narcissism that signals hippiedom at its worst. Say what you want about the lyrics, Tangerine never sounded less than sincere in their delivery, and many of the songs have that introspective touch that makes them genuine in their ability to reach and touch the listener.
~ review by Joe McGlinchey  2-6-04. 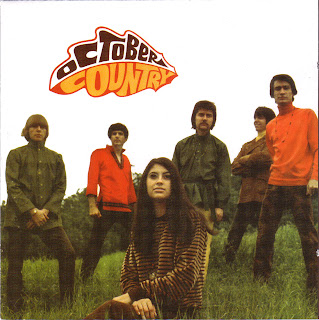