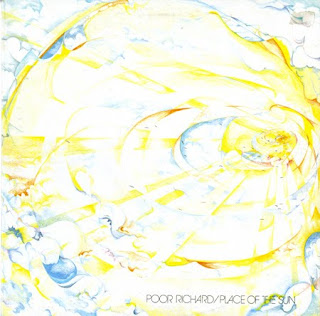 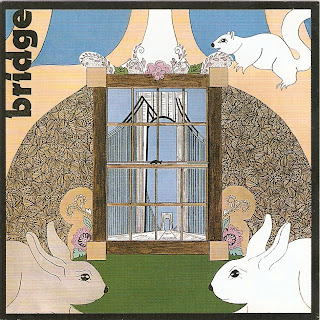 Bridge answer the question, for anyone who wishes to know, what happened to the Canadian band David after their lone record on Sound Canada in the late 60s.
Guitarist Francis Webster, bassist John Webster, and drummer Tony Lecallion from David make up Bridge who recorded this ultra obscure and rare record at the same Sound Canada studios in 1971.
Next to each song is a brief description of the musical genre of each ranging from "Ego Trip" to "Country" to "jazz shuffle." What this album is differs drastically from what you'd expect from David.
The best way to describe Bridge's album would be "Sweetheart Of The Rodeo" on tons of acid!
There is no fuzz guitar, but a clean westcoast shimmering tone on all tracks, bizarre vocal effects on the tripped out "It's My Life" and plenty of weirdness present for the whole album.
The tracks that are labeled "Country" all have a strange bent to them despite being early back-to-the-roots country rock influenced by Graham Parsons and "real" country artists like Hank Williams. The long "Ego Trip" version of Little Richard's "You're My Girl" is great fun and the only good version I've heard of one of his songs. There is something here very enjoyable for anyone looking for a bizarre twisted record of fun music, especially "Brand New Day" with echoes of Spirit and a bit of Freeborne. Very rare and a good one.
~ Ben Blake Mitchner (Acid Archives).

It's pretty nice rare album released on Vintage Records and re-released by Erebus Records on cd. 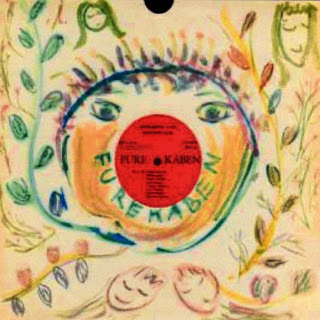 From hippie collective formed around guitarist and singer Hans Vinding. Furekaaben came from Denmark, famous for also releasing the legendary Moses LP! Drifting HEAD music. Exotic trippy dreamy textures with tabla, zither, Indian flutes, acoustic guitar, cello, etc. A real acid-psychedelic jewel out of the Scandinavian psych scene. The real deal for fans of Wooden Wand & The Vanishing Voice, No Neck Blues Band, Surburned Hand, the Black Velvet Fuckere collective and Tower Recordings.
~ By evermoreblues.
----------------------------------------------------------------------------------
As the great mail order catalog writer Paul Major once wrote, listening to Furekaaben is like "peeking through the bushes at an ancient mystic religious ceremony." That encapsulates the sound of both of these Christiana albums better than I could hope to achieve. I suppose the original Berlin commune group Amon Duul (sans II) is a guidepost, but Furekaaben are far more exotic, and rather than pound mercilessly on whatever percussive instruments are lying around, they choose a far more melodic route - though not in any kind of traditional sense. I also can hear the New York utopian group Children of One as a possible comparison. The first album managed a release on the Danish cult label Spectator. The second is an extremely rare private pressing, that I somehow managed to own for a number of years. If the psych scene existed in the year 723, this is probably how it would've sounded. Ancient roots stuff here folks.
~ By Ashratom (RYM).
----------------------------------------------------------------------------------
A genuine rarity, only released in 1971 as a follow-up to their “Prinsessevaerelset” album but way rarer since it was released in an edition of 100 copies. Music wise, it takes the basic ingredients of their first recording towards the next level of ecstatic orgasms. This self-intitled disc that came housed in a plain hardcover brown sleeve is a masterpiece of experimental acid folk jams. The music is completely stoned, propelled out of collective improvisation, almost throbbing along as some secret ceremonial procession. Again the music is essentially free form acid folk and its psychic maze reverberates off equal amounts of folk, free jazz, ethnic smash’n’grabs and a doze of avant-garde elements incorporating cello, oriental flutes, sanza, zither, gong, cymbal, bells, tabla, guitars, and lots of percussion instruments.
This is a music you have to undergo while sipping orange juice and wearing velvet underwear, at night with a head full of acid, with your nuts on fire and dancing to the beat of these thundering low-fidelity outbursts. Panoramic and kaleidoscopic at the same time, ending somewhere else while joined with pale riders galloping towards its blasted end-zone. Deliriously addictive. A must. Price: 400 Euro
~ Internet source. 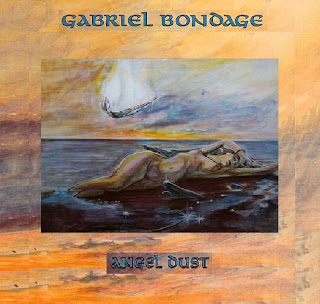 This is Dharma Records D-804. Gabriel Bondage formed in 1973 is a Chicago area band, comes out of Morton Grove Illinois. They are considered progressive rock but real hard to put a sound to their music. They sometimes have a sort of heavy metal sound,then a folk rock sound, flutes, acoustic guitar, they have a spacey organ and keyboard mix vocals echoing. It is a very interesting album and does leave you wanting to hear more. I am pretty sure the band only put out two albums this one called Angel Dust in 1975 and one after this.
~ by MENEGON, Luiz Carlos.
----------------------------------------------------------------------------------
I've known about this band and album since I snagged a copy of this in a collector's bin about 20 years ago. I also had their blue vinyl second LP "Another Trip To Earth" at one time but I can't recall what that one sounded like. I'm really surprised that this album isn't better known; there is a dearth of information about this album and group on the net (aside from a decent review of both albums at planetmellotron.com). Pretty good laid back symphonic prog. Can be very spacey at times, especially the opening track "Babylon". Nice flute, horn, piano, acoustic guitars, soft harmonized choral vocals. "Ladies and Gentlemen" is a great laid back acoustic guitar track with nice vocal washes. The 8 minute "Bondage" has some Canterbury moments bordering on RIO, but that's not the main sense of the album. Overall, this is a really GREAT slice of sadly overlooked mid 70's US prog.
~ by tallen14218 (RYM). 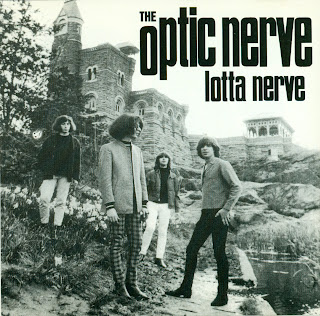 Biography:
Although born from the '80s New York garage scene, the Optic Nerve had nothing whatsoever in common with the movement other than their single-minded idealism to act as if the '80s and the synthesized music that surrounded them was not happening. Rather than using the blaring fuzztones and screaming the "put down" anthems of the garage rock revival, they took the jangling motifs of the Byrds, the Beatles, and a hint of the mid-'60s protest singers to create a sound that, if spawned in 1965, would have brought them success. In the mid-'80s however, '60s-styled folk-rock was not a huge seller -- even with fans of the neo-garage scene.
Acts like the Fuzztones, the Cynics, and the Lyres may have achieved cult underground status, releasing a number of records between them and touring across Europe, but the Optic Nerve only released two singles during their brief existence and rarely played outside of Brooklyn. Bobby Belfiore (main songwriter and singer) formed the nucleus of the band in 1985.
Over their two-year tenure, a number of musicians went in and out of their ranks -- including members of garage bands the Fuzztones and Gravedigger V. However, lead guitarist and harmony vocalist Tony Matura was a mainstay, and the combination of his and Belfiore's sweet harmonies and folk-rock jangling gave the Optic Nerve their distinct quality.
In 1993 and 1994, both Screaming Apple and Get Hip released an album, each consisting of Optic Nerve demos recorded throughout the mid- to late '80s. Every song deserved to be released at the time of recording, but in an era when garage revival and paisley pop were so popular, the Optic Nerve's country-tinged folk-rock was out of sync with both movements and caused little attention. Thankfully,
these albums have gained some belated exposure. In 1999, they re-formed for a performance at Cavestomp in New York.
~ Jon "Mojo" Mills, Rovi
Read more: http://www.answers.com/topic/optic-nerve-comic#ixzz1CqAEdtB3
----------------------------------------------------------------------------------
Formed around singer songwriter Robert Belfiore and lead guitarist Tony Matura, this New York group (not to be confused with the more recent Aussie group of the same name) explored the folk-rock side of the mid-80s garage revival, taking in the sounds of the Byrds and their jangle-rock L.A. contemporaries. This collection includes both of their singles on Cryptovision (1986's "Ain't That a Man" b/w "Mayfair" "Happy Every After" and 1987's "Leaving Yesterday Behind" b/w "Kiss Her Goodbye"), along with eight more demos that deserve to have found their way out at the time. The group's home page features additional tunes and lists a 2006 release on Cryptovision that doesn't seem to be available anywhere.
~ by Soapy.
----------------------------------------------------------------------------------
The jangle of the Byrds early records lived on through New York City's the Optic Nerve in the mid-'80s. Get Hip Recordings has compiled their existing 45s with several unreleased tracks to make up Lotta Nerve, A blistering 13 songs that evoke a number of trippy psychedelic folk-rock bands that emerged from London and California during the late '60s. Listening to the crisp Rickenbacker 12-string guitars and frail harmonies it is difficult to believe this music isn't actually from 20 years earlier, but the Optic Nerve's sense of authenticity belies the fact that their chronological contemporaries were mid-'80s icons like Madonna and Culture Club.
Lotta Nerve is a refreshing follow-up to the debut of the Rolling Stones' brash swagger and a logical precursor to the Stone Roses' swirling guitar rock.
~ Zac Johnson.

Normal version :
http://www.mirrorcreator.com/files/VR70R09H/The_Optic_Nerve_-_Lotta_Nerve__us_1994_.rar_links
Shorter version (You can share this on Twitter or other similar sites) :
http://mir.cr/VR70R09H
...and also...

Ετικέτες O, THE, The Optic Nerve 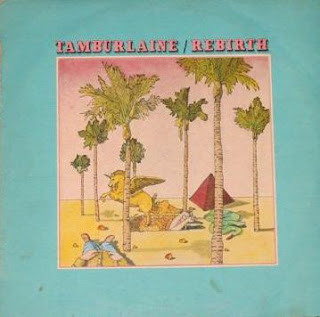 The 1973 album by this New Zealand group was very much a folk-rocky relic of the late hippie era.
The briskly strummed guitars, ebullient vocal harmonies, and relentlessly sunny lyrical glow of some cuts are like those of guys who’ve taken Traffic‘s “You Can All Join In” as their manifesto. Because it’s all done without a pinch of irony, it’ll drive those with a limited taste for feel-good rock up the wall and out the door. If you do enjoy gung ho folk-rock with a can-do rural flavor, though, it’s well executed, but derivative. There are echoes of not only Traffic at their most pastoral, but also Crosby, Stills & Nash‘s harmonizing on songs like “Wooden Ships,” as well as (less expectedly) some of the cartwheeling constructions of Yes — a band that did have some folk-rock influences, though those haven’t been widely acknowledged. Medieval melodic influences also pop up, as do, perhaps, the very lightest shades of the folkiest moments
of the late-’60s Beatles.
~ AMG.

Normal version :
http://www.mirrorcreator.com/files/SYTMR5G6/Tamburlaine_-_Rebirth__New_Zealand_1973__Tartar_SLC-118_.rar_links
Shorter version (You can share this on Twitter or other similar sites) :
http://mir.cr/SYTMR5G6
...and also... 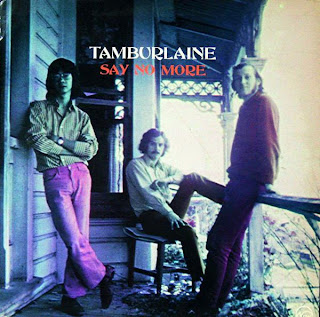 Normal version :
http://www.mirrorcreator.com/files/0GTOQF7C/Tamburlaine_-_Say_No_More__New_Zealand_1972__Tartar_SLC-105_.rar_links
Shorter version (You can share this on Twitter or other similar sites) :
http://mir.cr/0GTOQF7C
...and also...