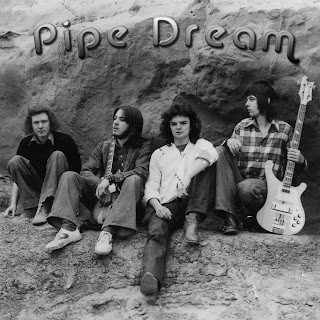 Biography:
Originally a five piece band with two guitarists, Mills left the band prior to their demos, which were recorded in Buckingham's bungalow in Willesborough, Ashford, Kent during summer '78.
Pipe Dream's music was a collaborative effort, with lyrics by Skingley.


---------------------------------------------------------------------
Pipe Dream was formed in 1977 and mainly came from Ashford in Kent. John Buckingham and Alan Cork had previously played together in the band Orpheus. John played keyboards this time and a bit of bass so that Paul could just sing on a couple of numbers.
Pipe Dream were originally a five piece band with two guitarists, unfortunately excellent guitarist and great friend Vern Mills left the band just before recording this demo.
All the following songs were co-written by Pipe Dream but the lyrics were written by Paul Skingley. They were Recorded live apart from the vocals in one afternoon at John's place at 6 Boys Hall Road, Willesborough, Ashford, Kent sometime during the summer of 1978.
Rate Your music.com have ranked Pipe Dream 12th for top bootlegs/unauthorized albums from 1978.
These recordings are probably 3rd generation but they are still generating a lot of interest.....
John last played keyboards in the band Lusyd with his son and sister. Three of these Pipe Dream songs have been recently covered by Lusyd plus the title song Pipe Dream that never made it onto the Pipe Dream demo.
John sends a special thanks to recording engineer Steve for providing the fantastic Wurlitzer electric piano and to Roland for the best hand's-on synth they have ever produced, the ultra cool System 100 - 101.