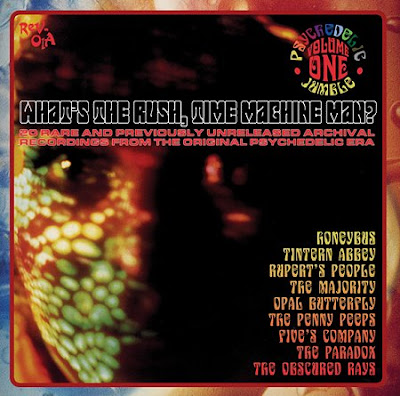 This review is from: Psychedelic Jumble Vol.1: What's the Rush Time Machine Man? (Audio CD):
What a top compilation of magic gems on this 1 CD. I ordered this album knowing that it will be a great listen and as soon as it arrived through the letterbox of my front door, I played it. It was what I was looking for in a British psychedelic pop compilation as the songs are rare and probably only feature on this disk. The artists deserve to be listened to. Some songs will always remind you of songs by well known artists (The Who, The Beatles, The Kinks for example), but it ISN'T them.
The sleeve is a bonus with an introduction by Stefen Granados (I assume he compiled the tracks) and a write up on the bands featured. The Majority, Tintern Abbey, Paradox, The Penny Peeps, Honeybus, Opal Butterfly, Five's Company, The Obscured Rays and Rupert's People are all here.
According to Stefen; 'Be warned that Psychedelic Jumble is not always a hi-fi listening experience, given that all but one of these were rescued from well worn crumbling tapes, but through the tireless efforts of sound wizard supreme Nick Robbins, all have been restored to a more than acceptable level of fidelity.' In other words, they are great songs with some slight crackle and hiss amongst the sound (some sound better than others)...I think that is the beauty of it.
If you're a collector of music, especially Psychedelic music, get this album.
~ By Mr. Brass (Manchester, England) 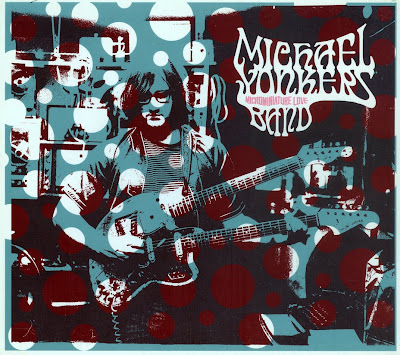 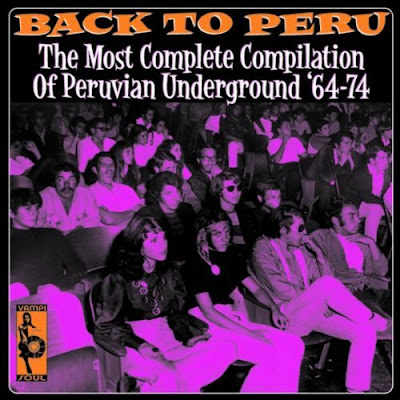 Outside of a handful of reissues from Inca rock outfits like We All Together, Traffic Sound, and Laghonia, the Peruvian music of the rock roll era has gone largely unrecognized and underappreciated in the English-speaking world. Back to Peru, a superbly eclectic and comprehensive overview of the scene during its 1964 to 1974 heyday, goes far in correcting the error, casting a net over the best hard rock, garage, soul, and unclassifiable weirdness the country has to offer. According to the engaging liner notes, this stuff is rare even in its native land, going far beyond the few Peruvian artists who have earned international notice into uncharted territory -- the sheer scope of the material is impressive enough, but its consistently high quality really pushes the disc over the top. Highlights include Hot Butter Sound's "Pa Pa Pa," los Holys' "Holy's Psicodelicos," and Black Sugar's "Funky Man."
~ #headphones.
---------------------------------------------------------------------
35 track collection of Peruvian beat/psych/prog covering the period from 1964 to 1974. Includes St Thomas Smelter,Los Mutables, Jaguars, Smog, Los Datsuns (nothing to do with current NZ rockers), We All Together, Traffic Sound and many more. With the album tracks running (almost) chronologically, you get a good idea of the progression of Underground music in Peru during the decade featured; from the beat/r&b of Los Saicos to the funky psych of Los Mirlos. Pressed on heavy vinyl and housed in a beautiful gatefold sleeve.
This is the album rip. 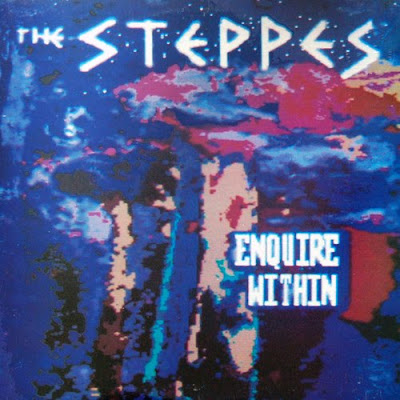 ....AND I'M AGREED! THIS IS THE BEST DESCRIPTION I 'VE EVER HEARD ABOUT THIS MASTERPIECE...
~ Alfaios.

Ετικέτες S, THE, The Steppes 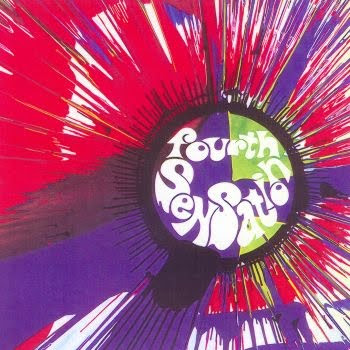 Another of those mystery groups that were so common in Italy at the end of the 60's, Fourth Sensation only appeared on an album released on the Ricordi International label, as if they were a foreign group. No names are mentioned on the cover though there are four musicians pictured on the back, but two of the band members may have been Vince Tempera (later with The Pleasure Machine and Il Volo) and Ares Tavolazzi (Area).All the tracks are composed by Massimo Catalano (that was one of The Flippers, a very popular beat band of the early 60's).Musically speaking the album has the same style as The Underground Set or Blue Phantom, a totallly instrumental psych-influenced acid-jazz sound, with the Hammond organ in evidence. The ten tracks have all women names.From:http://www.italianprog.com/a_fourthsensation.htm
This album is more typical of the instrumental psych/blues/jazz tinged library film/TV music, with roller rink organ and half Les Paul era electric leads/half psychedelic fuzz.
~ by mutantsounds. 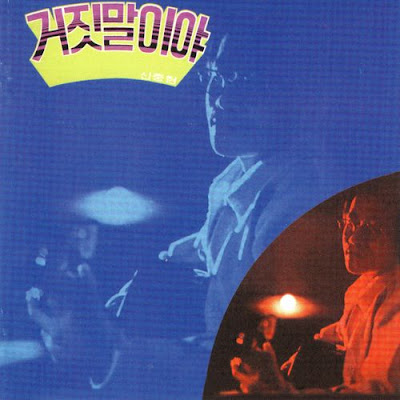 A great psychedelic album with 3 long tracks and very good guitar and organ work
'the Collection of Korean psych's golden age'. This album contains the peak of the 70's psychedelia of Korea.
The opening track '???? ??(Beautiful Country)' is the song which was originally forced to praise the then-military government.
But Shin Jung-Hyun refused to make the song like that and he made his own version which praises the beautiful country. Intro led by Kim Gi-Pyo's keyboard and Son Hak-rae's oboe emits classical magnificence and tragic beauty. After the indulging intro, Lee Tae-Hyun's bass which shows an outstanding groove develops the main theme. It could be described as an accordance amidst avant-garde discordance. There it goes, the essence of psychedelic.
The title track '?????(It's a Lie)' is a jamming leviathan. Although this is not a live album, this song has striking improvisations.(so these things make the album like a live or jamming album) The last track '???? ??(Woman in the Mist)' is also a fantastic jam. With Lee's Bass and Mun's Drum trembling on and making the rhythm tight and loose, the guitar, keyboard, oboe show the great jam. The endless flow of psychedelic jamming invites you to the state of complete absence of ego.
It is not so popular methodology that one can be attracted at once, but when you fell in love with, this is amazing.Just avoid your prejudice. Enjoy the trip!
Reorganized(& edited) & Translated by DH.Kang(Sorry for my poor English, but I wish this could lead you to the introduction of Korean rock)the original review by Lee Young-Woo in KoreanURL http://weiv.co.kr/review_view.html?code=album&num=1858
~ by slgma (RYM). 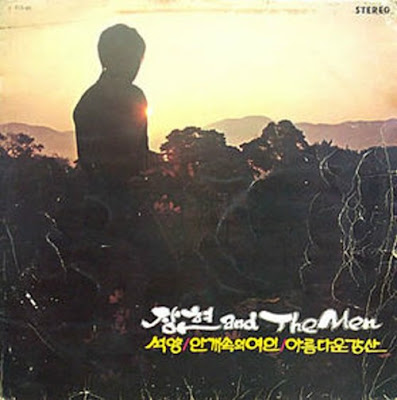 " Shin Jung-Hyeon is the Godfather of Korean pop/rock. He started his musical career in 1955. In those days, immediately after the Korean War, there were few musicians. At 1957 he could play at the US army in Korea. His psychedelic play fascinated US soldiers, and some record company asked him to make an LP. His 1st band Add 4 constructed in 1962. Add 4 is the first rock band in Korea. After the time SJH started to make hit songs. Kim Jeong Mi, Park In Su, Pearl Sisters, Kim Chu Ja, Im A Yeong, Jang Hyeon and other singers debuted with the support of Shin Jung Hyeon. They debuted with his hit songs and he became the biggest power in Ga Yo scene."
~ Folkie Jin.
----------------------------------------------------------------------------------
Woman of the Evening Sun has a lot more singing in it than the follow up. The psychedelic vibe is in full effect; this sounds like a Korean Doors band. It's more slower paced though. The second album is faster paced too and more progressive in a sense. The music is heartfelt and very nature-esque. Beautiful Rivers and Mountains definitely portrays that well. ~ Review by Selfmonarch.
That a first album by that band not as good as their second It's a Lie but still good enought for not being forgotten album.
Thanks to origynal ripper.
~ Posted by Ricsi. 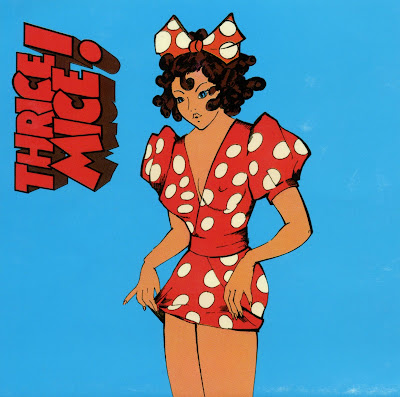 This singular album by Hamburg based band THRICE MICE is a nice example of early Krautrock exhibiting influences by Blodwyn Pig and Curved Air, both bands they’re paying tribute to by cover versions added up on the CD re-release. After some local success and a gig on legendary Fehmarn festival in 1970 (where Jimi Hendrix gave his last concert) they disbanded in 1972 when Rainer von Gosen decided to leave. His brother Werner and Karl-Heinz Blumenberg continued their progressive jazz-rock style with the band ALTONA.Thrice Mice which grew up from a beat school band originally presented here a quite noteable and for those days very unique blend of jazz elements, influences from classical themes and heavy rock using some technical sound effects that bring HAWKWIND into one’s mind. Although the four compositions are basically rather melodic and straightforward they’re highly enriched by improvising solos, intricate dual sax playing and use of big band-alike brass. The classically inspired "Vivaldi" was quite a big success for them when they played it live (can be heard as well on the CD release). Each one of the other three tracks is based on either a particular theme or story. "Jo Joe" is about someone’s idiosyncratic philosophy, “Pancy Desiree” is inspired by Joachim Ringelnatz’s novel "Fancy Desire" and "Torekov" is telling the very personal experiences of some band members with a Finnish girl on a camp tour in Sweden.Overall this album is a quite unique and noteworthy one, certainly not to be considered essential but anyway good. Highly recommended to collectors of rare and obscure German progressive albums!
~ By hdfisch (RYM).
----------------------------------------------------------------------------------
Early summer 1966, infected with Beatlemania, brothers Rainer and Werner v. Gosen decided to form their own Beat band. Born in Flensburg and raised in Hamburg they attended the Alexander-von-Humboldt grammar school in the suburb of Harburg. Both had previously taken piano lessons. Rainer took up the bass, Werner guitar and schoolmate Arno Bredehöft drums. The trio called themselves Thrice Mice and had ambitions of making it to the top which started well by successfully taking part in many of the "Battle Of The Beat Band" competitions.
In August they beat 6 other bands to win first prize in the Hamburg grammar school Beat-Band-Battle at Hamburg-Alsterdorf School. The newspaper Hamburger Abendblatt used the following headlines to report the event: "Beat Battle Too Loud For Music Teacher" and "Judge Sat Outside". The article from August 24th reported "ear numbing Beat Music, ear numbing applause, 7 Hamburg Beat Bands fought it out in the heat of the moment for the first prize. The Hall was boiling and only one person was left outside - the judge! It was just too loud for the music teacher who should have been a competent jury member, which he in fact was albeit from a distance. He sat on a bench in the gangway in front of the hall and listened from there. After 2 hours of noise the loudness ebbed and he announced the winners - Thrice Mice".
That Thrice Mice didn't even attend the host school and still won was a sign of their talent and ambition. The victory brought them recognition in the already growing Hamburg scene and was followed by ...
...more infos included... 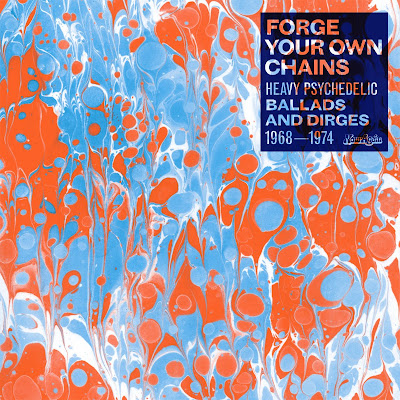