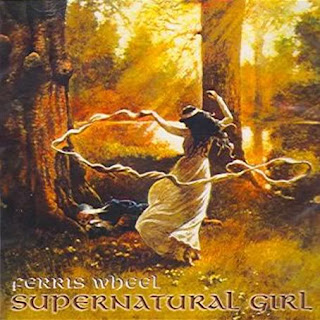 The rarest UK stoner-folk album from the early 70's. Dark, broody electric-folk with downer edge. Only recently discovered-just one know existing copy of original privet-pressing survived. A true lost period artefact and the ultimate folk rarity. Fully re-remastered, band details and original artwork included. Makes Leonard Cohen's albums sound joyous by comparison.
~ Audio Archives-UK.
----------------------------------------------------------------------------------
One in a million.  Like the impression left from swallowing whole a great book, or a decaying love affair, the music of dear Ferris Wheel has the ability to reduce the atmosphere around you to only the shimmering hazy essence of true nature.  Time doesn't exist, emotion is a pure substance tangible to the touch or other sense, ego is debateable - and may fly away in the wind; you're left with the frailest sense of being human in that perhaps one is nothing but sentient nerve.  I do believe Ed, Stan and Rich are tapped just that closely to the main wire...  the more I have listened to this LP the less I can deny some kind of complete musical and personal honesty on their part.  For me, this is truly shaking.  It's a long record, and I'm glad for it.  It works.  Songs are played with an effervescently melancholic leisure - working mistakes and earthy blunders left intact, not out of a loner's despair, but rather some kind of effortless cosmic resignation.  There's no need to rush, obviously.  These guys could be the oldest souls in the world.  And they'd know it wouldn't make a difference whether 5 people or 400 heard their moment of absolute medieval-heartbreak jangle quintessence.  Batter for the baking are the production values - marvelously warm, lo-fi, and glowing in a midnight pluck and ramble so rarely found in the private press, or anywhere.  Surely a counterpart to American signposts like Virgil Caine or Virgin Insanity, albeit of a completely continental drift - and less claustrophobic than either of those LPs - tempered instead with a slightly screwy grin and wistfully Baroque sense of humor as languid and bittersweet as floating out to sea in an unnamed vessel on the Mediterranean knowing that you may have so much in store but the faces and places and loves that have come before are impossibly lost to the mist.  Soulfully exhausted, perhaps entirely weary but still present. Still feeling! As long as the moon shines on the decks! Yes!
~ Joaquim_Peso (RYM).
----------------------------------------------------------------------------------
Woods, eat your heart out: Ferris Wheel was DIY-ing their outsider electric folk almost 40 freakin’ years ago. Not to be confused with funky mid-’60s UK pop band The Ferris Wheel, Ferris Wheel’s ’74 private press LP Supernatural Girl (reissued on CD by Audio Archives in 2004) is a soft, subtle album of understated pleasure. Not a staggering revelation; not the kind of total obscurity that splashes out of nowhere like a water balloon and makes you slap your own forehead like, “My god! Where has this been all my life?!” It’s just an endearingly flawed, not-too-adventurous but quietly beautiful, eerily distant, and impressively patient and melodic little album. The lyrics are kinda hippie-dippy, but hey, it’s early-’70s psych-folk; ya gotta just take it with a grain of salt. It also sounds like it was recorded in a pillow fort, but that’s a distinct part of its charm; a testament to what folks used to pull off in meager circumstances before we digitized our existence. If you were to say that Supernatural Girl was a case of private press translating more  to “vanity press,” I would say… Maybe. But when it’s cloudy outside and you want something sullen, stony and easy on the ears, you’d be thankful this long lost lo-fi gem was born and preserved.
~ Howard Wyman (crawdaddy.com) [published on July 23, 2010]. 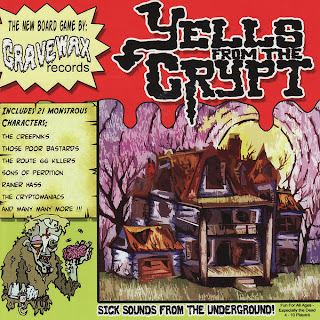 
Gravewax Records is a Lone Star State's company offering rockabilly, surf, spaghetti western, twang country sounds for the masses, the living dead & the masses of the living dead.
You can buy it here:
http://gravewaxrecords.com/index.php 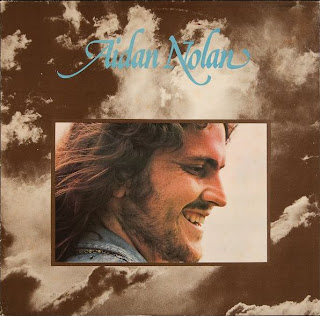 Biography:
Aiden Nolan's first band was a folk duet with school friend John Mortimer called Garage Plus. Inspired by American delta blues bands he sang in the soul band Respect with co-singer Danny Kramer, Brian Thompson (keyboards) George Meek (drums), Ian Davidson (guitar) and Tony Derkinderen (bass).
After Respect he joined Daisy Roots with co-singer James Willebrandt, Alan Sandow (drums), John Miller (guitar), Chris Harder (bass) and Craig Mannell (keyboards).
After Daisy Roots split and while working various non-musical jobs to pay the bills, he again teamed up with Jamie McKinley to form Nolan McKinley and they released "Love Train" through Festival Records in 1971.
He then joined Scarecrow with Kim Tucker (bass), Greg Wilson (guitar) Rob Elliott (drums) and Michael Erikson (keyboards).
He persuaded Rob Elliott to drum for the next band he put together, Trust Me; with John Magee on lead guitar,  Gerry Murphy as the female vocalist, Mark Becker on bass and Denis Ferraro on keyboards, they played a number of original songs but sadly never recorded.
Finally, there was Beyond Madness, performing covers of Madness, Split Enz and Ian Dury songs with Mark Lacey (guitar), Greg Opie (bass), Dave Linwood (keyboards), Rob Norsworthy (trumpet), Mark Hudson (sax) and Billy Warnock on drums.
Aiden then took up teaching full time and disappeared from the scene until a chance discovery by Stephen Lightbody of Two Faced Records of his 1974 recordings of Tales From the Sun. Stephen embarked on a mission to track Aiden down which he finally accomplished in 2005 leading to the re-release of Aiden's records.
Aiden is now back from the wilderness writing and recording and promises more records in the future, both re-releases of forgotten recordings and new material.
~ By RYM.