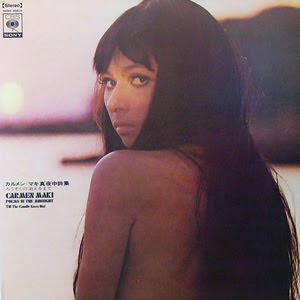 Profile:
Japanese rock musician and vocalist. Born May 18, 1951. Her father was American and her mother Japanese. 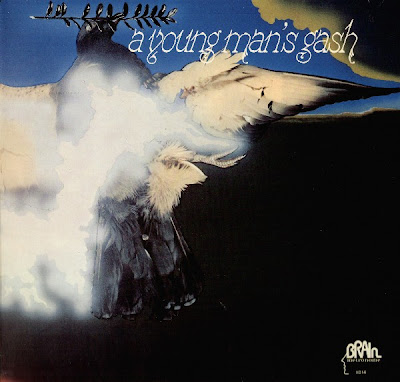 The only album from German band Gash, this starts out with three standard rockers, sounding a little like Nektar maybe, but the highlight is the title track, a 20 minute long suite of great space rock - the addition of some guest musicians and some help from a symphony orchestra really help this along. Definitely worth a listen.
~ internet source.
----------------------------------------------------------------------------------
This album is an unexpected surprise! I can think of few albums that start so horribly and end so incredibly! “Angel and Mother” is SO appalling on every level (soppy music, terrible lyrics, cheese-grater-to-the-eardrum vocals) it nearly made me want to throw the disc out of the window when I first heard it! But I stuck with it through the balance of the A-side (“Twentyone Days” is nearly as bad, but “In The Sea” is slightly better, sounding like one of Jane’s cast-offs) to make it to the “A Young Man’s Gash” suite.People, let me tell you this is one of the most amazing, fascinating and one-of-a-kind half-albums I have ever heard! It almost sounds like a completely different band! A blend of haunting rock & roll, orchestration and dark textures (the crazed screaming in Part 2 makes this a must to play around Halloween time!) that sound like nothing else I’ve heard before or since. Wow!Worth hearing for the mind-blowing title suite, but you might want to give the first three tracks a pass.
~ By Progbear (RYM). 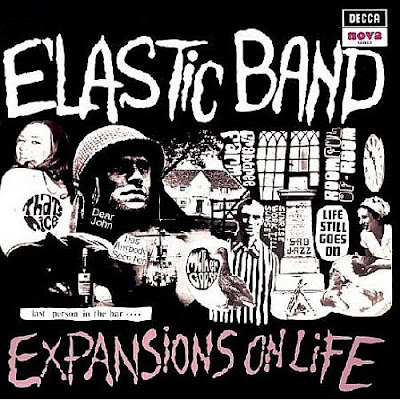 Notes:
- From the original Decca tapes.
- Feat. Andy Scott member of Sweet.
- (note the typo in Featering as given on the release instead of Featuring).

Reviews:
From North Wales, Elastic Band were one of the exponents of the UK psychedelic rock scene from the late 60’s and featured Andy Scott who would go on to become guitarist with the famous Sweet. Other members were August Eadon (Gus) who went by the name Ted Yeadon when he was a member of Elastic Band, Sean Jenkins (drums) and Mike Scott (bass - Andy's brother). The band broke up in 1969 when Yeadon accepted an offer to join Love Affair.
They released an album (LP record) entitled Expansions On Life [1969/1970] on the Decca Nova label.
Gus Eadon joined the band Zzebra in 1974.
~ From Wikipedia.
----------------------------------------------------------------------------------
The starting point for Sweet guitarist Andy Scott, The Elastic Band emerged from the ashes of mid-60s Welsh soul revue the Silverstone Set to make a couple of highly-regarded 1968 mod pop/blue-eyed soul singles for Decca. But a year on the underground gig circuit supporting the likes of Hendrix and Pink Floyd impacted significantly on the bands musical direction. When they returned to the studio in the summer of 1969, it was to cut Expansions On Life, a dazzling 50-minute collection of late psychedelic/early progressive rock moves which suggested that the new-look Elastic Band could be genuine contenders. Inexplicably, though, Decca delayed its release until March 1970, by which time the band had fallen apart, lead singer Ted Yeadon having left in December 1969 to replace Steve Ellis in the Love Affair. As a result, Decca barely promoted the album, which duly sank without trace. * File under: 60's Psych * Established for the last couple of decades as a heavy duty rarity amongst collectors of vintage British psychedelia and progressive rock. First-ever official UK reissue Includes bumper 20-page booklet, extensive liner notes, restored artwork and master-tape sound as well as some priceless photographs * Features all four tracks from the bands equally collectable 45s, including the regularly compiled psychedelic pop nugget 8 Hours Of Paradise
~ 991.typepad.com/991sleevenotes.

Ετικέτες E, THE, The Elastic Band 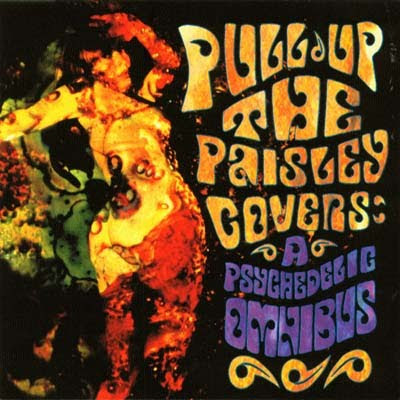 From Aural Innovations #23
(April 2003):
An interesting collection of quality 60's psychedelic covers by modern bands, with source material focusing on either the famous (Doors, Who, Stones, Airplane, Pretty Things, Bee Gees) or the hopelessly obscure/collector-hyped (Apple, the Fox, the Syn, Ed Askew, Churchills, Linda Perhacs), but always those with strong songwriting, and very much on the pop side of psychedelia. Even without the Blue Cheer / MC5 / Deviants heavy side of the genre represented here, the variety of sounds included is still impressive, from the Silverlake (as in, Beck's neighborhood) trip-hop/folk of Sunseri covering "Peace Frog/Blue Monday" to Kaminamada Yohji's solo electric guitar improvisation, "After The Dream", based on "To Keep From Crying" by malevolant-pagan-acid-folk band Comus. Nonetheless, probably a good half of the album fits within the "folk"-psych category, while most of the rest concentrate on psychedelically-effected catchy (to the point of twee) pop songs. In that former category, even Mushroom (an older recording with preeminent sixties music scholar Alec Palao still on bass) take on Jefferson Airplane's "You're Only As Pretty As You Feel", is an uncharacteristically folky (enjoyably so) performance, with Caroleen Beatty's co-vocals (as diametric as you can get from Gary Floyd's bear-sized bellow on their more recent sixties covers album) and silky violin melodies from Matt Royston.

Wylde Olde Souls add flute & tablas to a raily rocking version of Ed Wheeler's (as by Carolyn Hester) "High-Flying Bird" (also covered by the Airplane), followed up with another pleasent jangly tune with Damien Youth's cover of the Bee Gee's "Kilburn Towers" (nice, but in no danger of out-psyching any of the Index's takes on the Gibbs' songs). Also in that style are Diana Senechal - a notable cellist/multi-instrumentalist who adds acoustic guitar, xylophone (or some other sort of tuned percussion), occasional delay/phase effects (plus bits of dissonce - sirens & other concrete sounds), all under immaculately-layered harmonies and Pat (PG Six) Gruber, who appropriately tackles the Incredible String Band's "My Name Is Death". In addition to Sunseri, The Sand Pebbles' Masters' Apprentices' (a fellow Australian band who are one of the few "middling", rather than famous or obscure, bands among those covered here) cover adds smooth electronic sounds (and the real drums play a convincing loop-ish beat), as do UHF, on their reasonably straight version of the Pretty Things' properly anglo-pop "She's A Lover" with its' subtly-swelling electronics (and occasional silly effects). The Sand Pebbles get extra points for stretching out and jamming a bit (clocking in with the second-longest track on the album at six and a quarter, a dozen seconds behind Mushroom).

Zane Armstrong and Peter Scion (both covering songs more obscure than my knowledge delves down to) both operate the one-man studio project pop vein, placing sonic effects nicely in their fairly sparse recordings, with strummed guitars, subtle vocal effects and synth/keyboard bits. Israeli quartet (like the Sand Pebbles, covering countrymen - the Churchills) Rockfour are equally upbeat and poppy start out incredibly jangly before first breaking down a bit, then rocking out in a piano-and-whistle enhanced near rave-up. Taurus provide a murky and mildly-dissonant contrast to the (sometimes slightly-overly) precisely-crafted nuggets on the rest of the album, with slowly-meandering organ bed, intermittently-spiky guitar and loose drumming, on ESP-disk artist Ed Askew's "The Garden". In the slightly heavier department, Abunai! present a giddily fuzzed version of the Stones' "Citadel" (a fine psych-pop melody that shows Mick Jagger had greater talent for dames'n'devil lyrics than "psychedelic" ones). And, of course, the Bevis Frond always deliver the goods, with Nick Saloman's anthemic fuzz guitar making for a soaring version of the Syn's "Grounded". Hailing from Normandy France, Murder in the Cathedral's intertwining lead guitars and fuzzed organ & bass add layers of menace to "The Good's Gone" (although it's still more jangly than heavy), one of Pete Townshend's choice pieces of burnt-out-romance angst (while also sounding suspiciously like the early Pink Floyd outtake "Lucy Leave" - either a nice intentional touch or a fortunate accident).

All very talented bands, with an affinity for the material, doing excellently-executed versions. But despite Abunai!, The Bevis Frond, and Murder in the Cathedral, I still found myself craving for more of the heavier and jamming sides of psychedelia. The liner notes mention a second volume in the works, so perhaps it will include a few songs along the lines of "7 And 7 Is", "Interstellar Overdrive", "Welcome To The Void", "We Did It Again", "Stoned Guitar", "Third Stone From The Sun", "St. Cecilia", ... you get the idea ...
~ Reviewed by Doug Pearson.

You can Buy it here:

Pull Up The Paisley Covers: A Psychedelic Omnibus 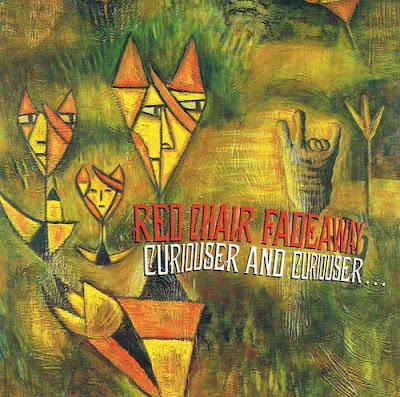 Notes:
Great and rare English psychedelic folk rock album with the singles & rare flexi tracks as bonus cuts. Great instrumentation Harpsichord, Organ, Flute-Organ, Tamboura and Morrocan Hand Drums.
Combines the original C&C album from 1991 (Tangerine MM 10) with two 1989 12" EPs (Cosmic English Music CTA103 and CTA105). All were very limited editions. The final track is from a 1991 flexidisc free with issue 6 of Waterbomb magazine.
~ Internet Sources.
----------------------------------------------------------------------------------
Red Chair Fadeway were named after a track off of the first Bee Gees lp and was Tim Vass’ first project that did not involve Gregory Webster (unlike Razorcuts, The Cinematics and The Forever People). They released two albums: Curioser and Curioser (1991) and Mesmerised (1993). Also released were three singles and a flexi. Vass also recorded with Dandelion Wine.
Apart from Vass, the band was mostly Shirley Souter who sang on some of the songs and wrote most of them. Richard Mason plays on the records as well.
~ by last.fm. 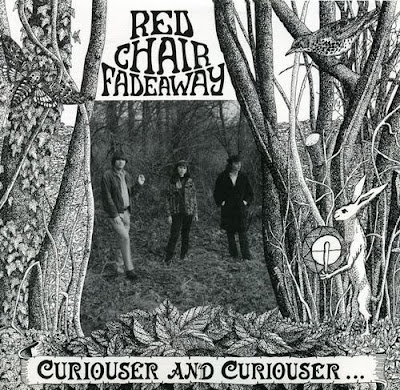