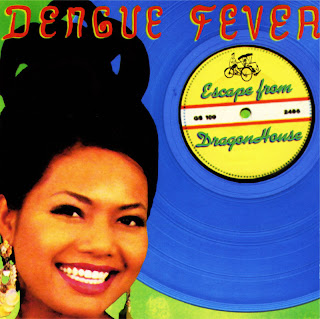 
Review:
For their sophomore album, Dengue Fever switch away from their nearly all-covers repertoire to try something a little more bold -- writing originals while still developing their rock-music-into-Cambodian-pop-and-back-again approach. It's actually a good move in order to escape from lingering questions of "just" being a museum piece of a group. Happily the six-piece step up, introducing an interesting curveball as well with a newly professed interest in the upbeat, horn-driven Ethiopian pop/funk/rock of the '60s and '70s collected in the Ethiopiques series.
Though one could cynically wonder if the band is going to end up incorporating a new retro scene per album, Dengue Fever clearly are out to entertain by whatever means, and by putting a slew of things together, create something new and unexpected. Chhon Nimol's singing is again top-notch, even slipping in a bit of hip-hop flow on "Sui Bong," while her greater fluency in English also creates more of a truly unique sound for the band. The Holtzman brothers again provide the musical core, with Ethan's work on organ providing the kind of smoky funk appropriate to the proceedings. Zac's guitar adds good crunch, but it's the strength of the overall arrangements that truly matters the most, as songs slip from bass/drum breakdowns to horn-driven explosions of joy. Standout moments include the nervous, almost early Cure-style introduction to "Tap Water," the beautiful ballad "Sleepwalking Through the Mekong," and the acid-trip drama of "One Thousand Tears of a Tarantula," which deserves to be a neo-psychedelic classic. The one cover this time around, "Tip My Canoe," is of legendary Cambodian singer Ros Serey Sothea, with Zac duetting with Nimol, a feat they repeat in English, Nimol taking the lead, on the passionate "Made of Steam." It would be striking to see what Dengue Fever could do with engaging fusions of the current day -- there are pop, techno, and hip-hop numbers worldwide as joyfully inspired and specifically local as those older songs the group adores. No matter, though, so long as the band keeps creating such excellent work.
~ by Ned Raggett (AMG).
----------------------------------------------------------------------------------
World music-- music that expresses the indigenous folk traditions of a specific culture-- has always been closely bound with notions of authenticity, since it develops outside of capitalism's imperatives, solely as a conduit for a culture's heritage. Listening to Dengue Fever's second album, Escape from Dragon House, without any sort of background information or context, it's easy to assume that it's an authentic example of modern Cambodian pop music that has reached American shores, undiluted. In fact, Dengue Fever's story is much more complicated and-- depending on your perspective-- either inauthentic or thrillingly mutli-culti. For my part, I don't believe the dilution of world music is anything to get upset about-- it provides exciting new opportunities for musical expansion and cultural exchange. We tend to think of traditional music as something static, when in fact, traditions evolve over time, picking up new influences according to the maneuvers of history. Now that telecommunications technology grids most of the world, the rate of evolution seems to be speeding up, and the old styles we think of as so permanent either persist outside of the new music, or they become a part of it. So it goes.
American rock and soul music and its instrumentation and stylistic tenets found purchase in trad Cambodian music in the wake of the Vietnam War. So Dengue Fever are revising an "authentic" style that was actually bastardized from the moment of its inception, folding modern American pop idioms into a Cambodian style that was heavily influenced by classic American surf rock and Nuggets-era garage-psych. Dengue Fever also blend the long rhythmic lines of Ethiopian pop and jazz into the melting pot (for more on Ethiopian music, check out the Ethiopique series, or just ask Joe Tangari). But here's the real kicker: Except for the singer, the entire band is American. Based in Los Angeles, Dengue Feature includes Ethan Holtzman on Farfisa (his phrasing is reminiscent of Ray Manzarek's), guitarist Zac Holtzman, saxophonist David Ralicke (who's played with Beck and Brazzaville), bassist Senon Williams of the Radar Brothers, and drummer Paul Smith. The group assembled around their love of Cambodian music; only then did they find singer Ch'hom Nimol in Long Beach. Nimol sings in her native Khmer, and while she was making her Stateside living singing at Cambodian weddings, she was a star in her native country, often performing before the King and Queen.
Dengue Fever's debut album was all covers of the cute, romantic Cambodian pop of the 1960s. Having gotten that out of their systems, they've followed it with an album of original material that shatters the language barrier with mildly psychedelic, blissed out pop. On "Tip My Canoe", Zac Holtzman takes a stab at singing in Khmer, laying those long, mellifluous syllables over a tweaky vamp, as Nimol uses her imposing pipes to trace accents so dynamic that they sound almost vocodered as she leaps around her impressive range. "Sui Bong" channels Dick Dale through its verses and explodes into crunchy garage rock choruses, with a-- wait for it-- Cambodian rap bridge. "One Thousand Tears of a Tarantula" pairs sun-baked spaghetti western guitars with Nimol's clipped, forceful singing, and acoustic ballad "Hummingbird" closes the album on a quiet note, with Nimol sliding between English and Khmer. If that fact that Dengue Fever's music has been used in films as diverse as Jim Jarmusch's Broken Flowers and the John Cusack vehicle Must Love Dogs isn't proof enough of its potent versatility, then the ease and unity with which the band conflates idioms should be.
~ Brian Howe, December 5, 2005. 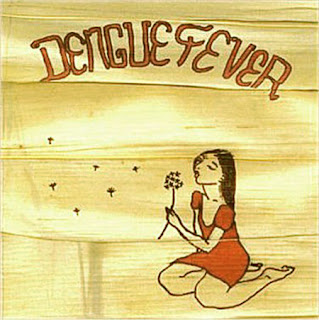