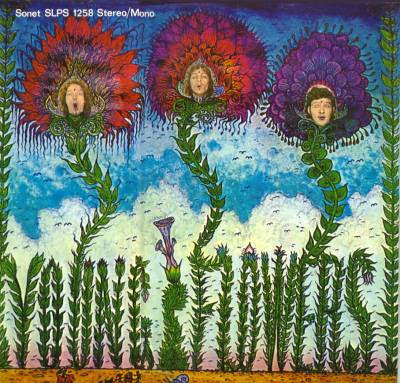 Biography:
The only pure hippie group to come from Copenhagen during the late sixties was Young Flowers. The aspiring guitar player Peer Frost had previously been in Peter Belli & Les Rivals. Blomsterpistolen (1968 - the title means "the flower pistol") was a milestone in Danish rock. The music was made for their own surrealistic TV movie of the same name (which also featured their "rivals" The Beefeaters). Young Flowers were strongly influenced by Cream, Jimi Hendrix and The Beatles (typified by their classics "Strange Brew", "Axis: Bold As Love" and "Taxman", respectively). A couple of the tracks had Danish lyrics, including "25 Ore" (7:53), a never ending boogie blues derived from Canned Heat's "On The Road Again". More effective was the psychedelic jam "April '68" (8:56) and the shorter songs with strong lead guitars, studio effects (lots of flanging) and a really strong rhythm section. The group lacked a really capable vocalist, though.
The second album contained more of the same, ranging from the exceedingly flanged "And Who But I Should Be" to the "Calypso" in "Obladi-Oblada" style. The trio are joined by Niels Skousen on many tracks and by The Maxwells on the freakout track "Kragerne Vender" (10:31). In. my view, this album was their most powerful and best effort. Young Flowers undoubtedly inspired a flood of young aspiring power trios, including Blues Addicts, Terje, Jesper & Joachim and Moses (although these had a rawer garage sound). The three young flowers themselves would later resurface in several important groups: Peer Frost in Midnight Sun, Rainbow Band and Savage Rose, Peter Ingemann in No Name and as a session musician for hippie folk-rocker Sebastian, and Ken Goodman in Culpeper's Orchard.

I love this great Band.Thanks

Just some additional info I found:
The band debuted in 1967 with the single “Like Birds b/w City Of Friends” on Sonet, after the release of which, the guitarist Jens Dahl left the band and Peer Frost joined;
in 1968 Young flowers also wrote the music for the short movie "Caecilie";
there is also a live album called "Young Flowers Live" from 1969 from the city of Århus/Aarhus (Denkmark) which features songs that are not on Blomsterpistol or Vol. 2, like "Wake Up This Morning" (which is the same as "Party Beat" from the OST "Quiet Days in Clichy"-album (nice movie by the way)) and probably others, didn´t find the playlist yet;
another band that Gudman played in would be "Mo-I-Rana"

Oke - hope that´s valuable information for all the freaks out there, who love that 60s/70s psychedelia from around the world like me :-]!

Also - on which album does "Strange Brew", "Axis: Bold As Love" and "Taxman" appear?
Please tell me - because obviously it´s neither "Blomsterpistolen" nor "Vol.2".
Also there is an album called "Young Flowers 1967-70" f.e. with the song "The Pusher".
So obviously there is a lot missing in this discography - would really like to know what that is if you know.

Hi Dude!
Thanks for your comments.
I have no idea about these songs...
Maybe there 're some uknown live performances or bootleg or unreleased material...

If anybody else knows something about it, please let us know!

If I find out more about that I´ll let you know too.
Also - there is a Young Flowers album called "DR Sessions".

Young Flowers never recorded covers of "Strange Brew", "Axis: Bold As Love" and "Taxman". They were just mentioned as typical songs by Cream, Hendrix and The Beatles.