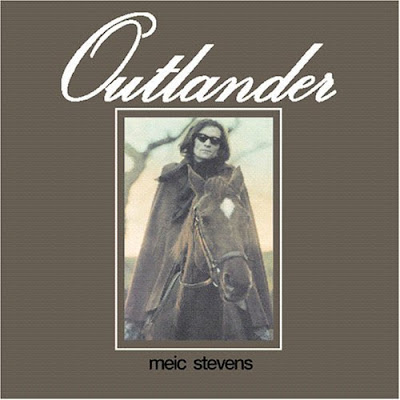 Info:
Meic Stevens may not be a familiar name in much of the world, but in his native Wales the singer-songwriter's stature is often compared to that of Bob Dylan. A local legend whose psych-folk influence can be heard in such contemporary Welsh groups as Super Furry Animals and Gorky's Zygotic Mynci, Stevens also founded his country's first independent record company, the estimable Sain label.
Stevens sang mostly in his native language, a political act not unlike speaking Basque in Spain or Cherokee in the U.S. His one English-language album is 1970's Outlander, an outstanding marriage of musicianship and eclecticism. Arising from the same fertile soil as the work of the late-'60s icons, Stevens's album nonetheless manages to avoid easy comparisons. Its jazz-Indo-psych ragas merge seamlessly with its acid folksongs and Dylan-esque meditations on relationships and politics. Performed by a remarkable cast of musicians hand-picked by English rock tastemaker Ian Samwell, Outlander was created with a minimum of rehearsal and consists largely of first takes.
Greeted with critical acclaim upon Outlander's U.K. release, Stevens traveled Stateside for a two-week tour in the summer of 1970. But the album never crossed the Atlantic; its very first U.S. release is this expanded, remastered Rhino Handmade issue. Copies of the LP have fetched upwards of $500 on the collectors' market, a testimony to the enduring quality of its songs.
Now, fans can enjoy the original album in its entirety, along with nine bonus tracks, including outtakes, alternate versions, and the 1970 B-side "Blue Sleep." Outlander is available as an individually numbered limited edition of 2,500 copies. greetings...
~ by Amadeus.

just discovered your wonderful blog, so many great lost albums, thanks so much!!!

Whoah! Meic didn't found Sain, in any way shape or form! I appreciate your post, and anybody giving Meic props is well appreciated. He's now got the second volume of his autobiography out (buy direct from http://www.ylolfa.com/). You may be confusing Meic with Dafydd Iwan, another Welsh troubadour, but (I think even he would admit) not in the same league: http://en.wikipedia.org/wiki/Sain