Rebecca And The Sunnybrook Farmers - Birth (us 1969 psychedelia) 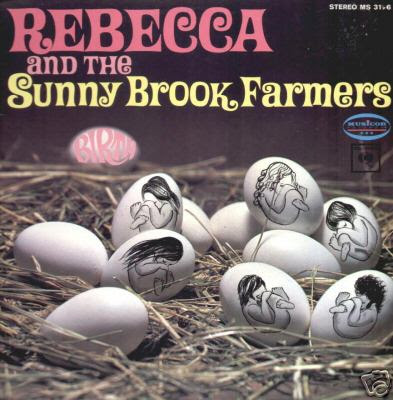 Rebecca and the Sunnybrook Farmers - Birth (us 1969)

Here are many odd things about the sole release from Rebecca and the Sunnybrook Farmers. First of all, the album was recorded in one weekend. The band drove up to New York from their hometown of Pittsburgh, recorded the album, and went home. Secondly, the album's label, Musicor Records, was primarily a country label. The only other hippie band on the label was the equally obscure Tingling Mothers Circus. Third, the bluegrass sounding band name; while hippies often DO have farms (especially indoor ones), the band name is hardly an indicator of the freakiness present on the album. And that's just the beginning: there are two Ilenes in the band (although one is really Lauren Wood), no one is actually named Rebecca, there is a violin player, and the band is nearly eclectic to a fault. And yet, the album holds together under the weight of all this strangeness, managing to deliver a solid set of songs that are enthsuiastically and imaginatively played
Side One is especially strong. "Two Blind Sisters" is a beautiful, baroque tearjerker, "Endless Trip" is a nice slice of West Coast pop, and "David and Sally" fairly represents the band's kooky, old-world side. Side two veers away from pop, with only slightly less success. "Better Dead than Red" starts off innocuously enough in a reflective, soft-psych mode, only to explode into a barrage of gunfire sound effects, whistles, and cacophonous drumming.
If you can track down a copy, I highly recommended this album, especially the songs composed and sung by Lauren Wood, a gifted songwriter who still plays to this day.
Source : http://www.lostinthegrooves.com/rebeccasunnybrook

Alfaios, only one person in this planet could have that name..

He He He!
Yes, My Friend Sotiris, It's Me!
Where Is Your Blogspot?

I have a Chunky, Novi & Ernie ALBUM, anybody want it I can UPLOAD it Mediafire for you all.

Hi Master Tang! Yes I would like to upload the: Chunky, Novi & Ernie LP, for anyone who wants to listen to this.
Thanks!

I just read about the Chunky, Novi & Ernie album in John Cale's autobiography and would love to hear it.

An interesting bit of trivia is that the band member named Mickey Kapner is actually Milton Kapner now known as Brother Nathanael.
http://www.realjewnews.com/
His voice is very prominent on this recording. Do you have the whole recording to upload?

my aunt/godmother is one of the ilene's in the band :) she told me today about when she got her record deal when she was 16 and she toured japan with them too and played at woodstock. they rock!

A few corrections: We spent at least a week in NYC recording the album at Musicor studios and we flew back and forth from Pittsburgh. Ernie and I drove to NYC earlier on a Thursday and landed the recording contract on a Friday afternoon after bumping into a friend of Earnie's named Victor who was playing in the Broadway musical, "Hair" and introduced us to the producer at Musicor, Steve Schwartz. Yes, we did play at Woodstock, but it was in 1968. The big bash was a year later. If the band went to Japan, it was without me. Thanks for your good comments. Most of the credit goes to Mickey and Ilene (Lauren) who composed and arranged the music. .

I heard this band play one 1969 Saturday night in a student rental house on a side street next to Carnegie Library in Oakland (Pittsburgh's academic district). I was, ah, how should we say, wasted at the time, and recall entering the house by an outside stair direct to the top floor where the band was playing. The fact that I remember the show at all suggests that the band really kicked some serious butt that night!

How did Milton (Mickey) end up promoting Russian propaganda?

Gonna give this one a try :) Thanks for the share!
Theredhippieteenager.blogspot.com

I came upon this page by accident, but read it anyway out of curiosity. I noticed that you had trouble understanding the name of the band. It's a reference to the 1903 children's book Rebecca of Sunnybrook Farm by Kate Douglas Wiggin. It's a really good book, in my opinion, and this page came up when I was on Google looking up interesting things about it. I hope that clears up any confusion!

I saw Rebecca and the Sunnybrook Farmers in concert. I am from Pittsburgh and remember them playing in the basement of local church (not an unusual venue at the time for local talent) along with a light show. I don't remember much about the concert--naturally--but it did prompt me to buy their album, which I still have.