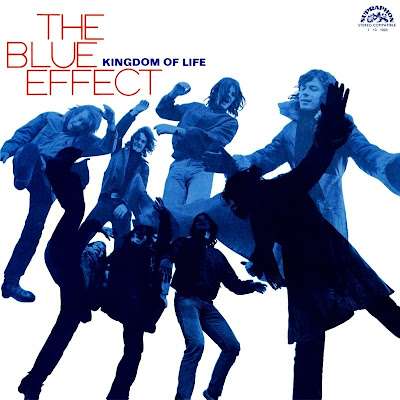 Biography:
Best known for their Yes-like prog work in the '70s, the Czech Republic's Blue Effect were formed in the late '60s, when that nation was still tied politically and geographically to its Slovak neighbor during the Cold War. Led by the renowned guitarist Radim Hladik, Blue Effect first came to prominence as an R&B-influenced rock act with their first two albums, 1969's Meditace and 1970's Coniunctio. It was at this point that the Soviet-backed government stepped in and forced the band to alter its name to reflect a more "Czecho-Slovak" heritage. Now dubbed Modry Efekt (and, at times, M Efekt), the band began to venture into the more progressive rock elements that would define — for many — the true identity of the group. By 1975, the sounds of British prog had taken full root in the sound of the band, in addition to solidifying Hladik as one of his country's top rock guitar virtuosos. The prog — and the continued growth of Hladik's skill — progressed on two follow-up full-lengths, 1977's Svitanie and 1979's Svet Hledacu, but the band had seemingly fully exhausted itself with regard to the sound that had won it so many converts. Proof of this new direction was to be found in the much more middle-of-the-road effort of 1981, 33, which was also notable as being the last release from the band. While the band quietly folded, Hladik continued to hone his skill and ply his trade. In 2004, with the release of a Blue Effect best-of compilation entitled Beatová Sín Slávy, the band — now fully under Hladik's leadership — began to hit stages in the Czech Republic. A live effort, Blue Effect: Live, was also released around the same time, and was a Top Five chart hit.
~ by Chris True (allmusic.com).

Ετικέτες B, THE, The Blue Effect