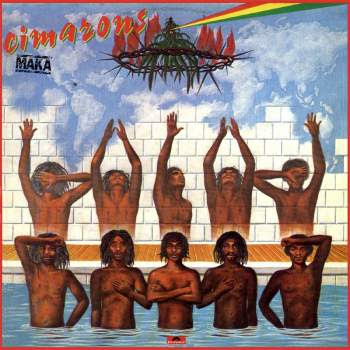 History:
The Cimarons formed at a Harlesden methodist youth club in 1967. They initially worked as a backing band for visiting Jamaican singers, eventually being invited to tour Africa in the same capacity. Their first singles, including "Funky Fight", "Oh Mammy Blue", and "Holy Christmas" were released on Trojan subsidiaries including Big Shot and Dandy Livingston's Downtown Records. They also recorded as the Hotshots in their early years, having a UK number 4 hit in 1973 with "Snoopy vs. The Red Baron", with producer Clive Crawley on vocals, and worked as a studio band for producers including Joe Mansano. They toured extensively in their own right, and released their first album, In Time in 1974. This was composed of cover versions of songs such as "Over The Rainbow", "You Can Get It If You Really Want", and original songs. For the second album, 1976's On The Rock, the group travelled to Jamaica, recording with Tommy Cowan.
The band were picked up by Polydor Records in the late 1970s, who issued Maka and a live album, both in 1978. In the late 1970s they shared a stage with punk bands as part of the Rock Against Racism movement. They then moved to Virgin Records for 1980's Freedom Street album. 1982's Reggaebility included cover versions of pop songs such as The Beatles' "Love Me Do" and Wings' "Mull of Kintyre", and proved to be their last studio album.
Singer Winston Reid also found success recording under the name Winston Reedy, topping the reggae chart in 1983 with "Dim the Lights". Reid and Dunn continue to perform as The Cimarons.
~ Taken from Wikipedia.

Ετικέτες C, THE, The Cimarons